Burna Boy Global Superstar In Concert At The London Stadium

Burna Boy Global Superstar In Concert At The London Stadium 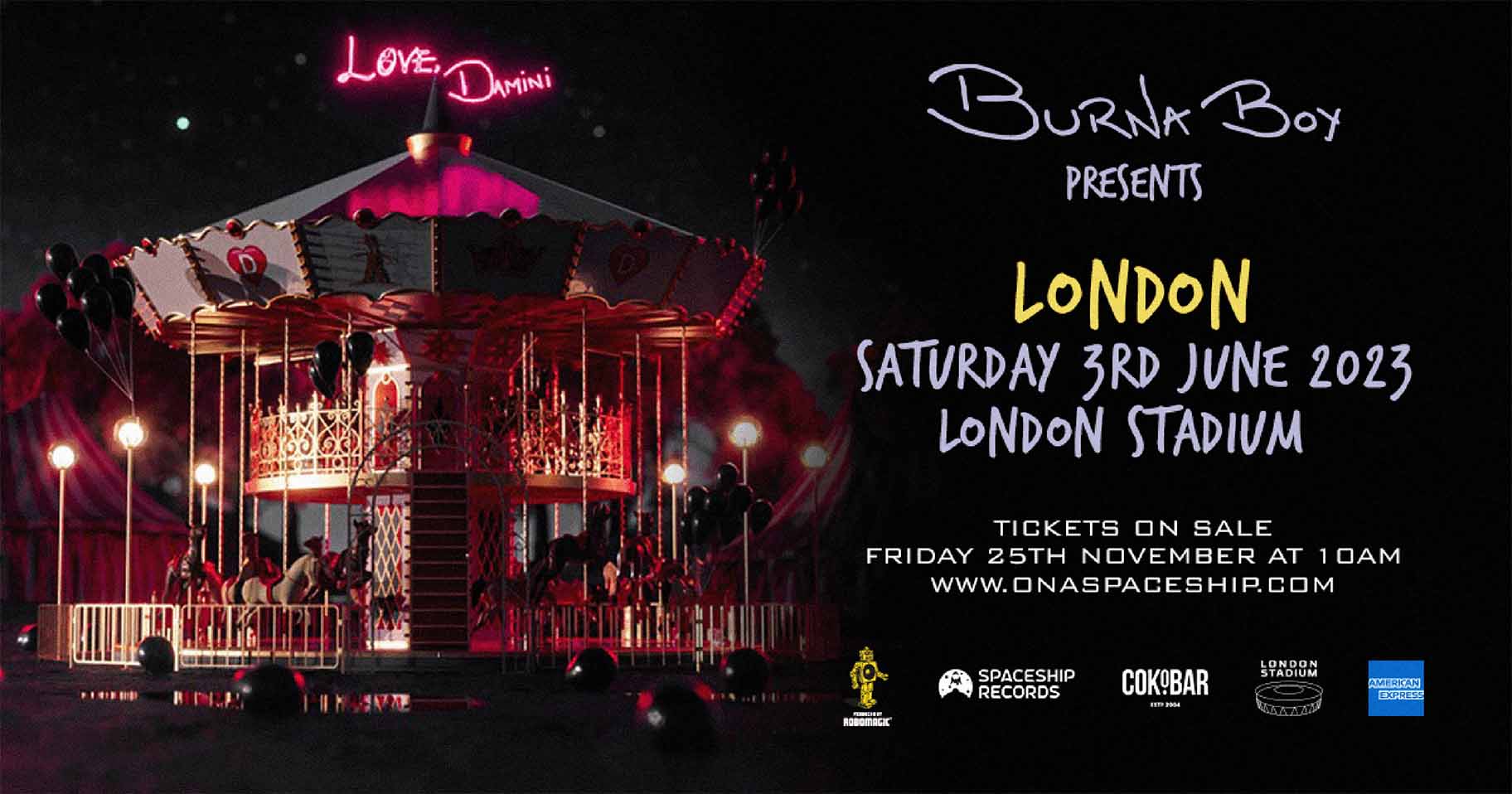 Robomagic Live and Coko Bar are excited to announce global superstar Burna Boy’s Love, Damini Stadium concert which will take place at theLondon Stadium on Saturday 3rd June 2023. Burna Boy is set to become the first ever African artist to headline a UK stadium. Tickets are on sale at 10.00am on Friday 25 November, available at

Renowned for his electrifying performances, striking production and larger-than-life props the Grammy Award-winning artist is sure to deliver an unforgettable show at London Stadium with surprise guest performances and welcoming next-generation sound, production and lighting.

Burna Boy said “London Stadium is going to be my fairground!  I’ve been told that I couldn’t achieve anything because of where I came from, I hope this can show people that when you have a dream it doesn’t matter where you’ve come from, your dream can come true. This is going to be legendary, it’s history and I can’t wait for you all to be a part of that.”

The London Stadium show will be Burna Boy’s largest solo audience, he will take to the stage to over 60,000 people. Recent career highs saw him perform before sold-out crowds at Wembley Arena, in November 2019 and at The O2 Arena, London in August 2021. He released his sixth album “Love Damini” this year leaving his audience poised to see him set the stage alight at London Stadium with his new music.
During his full band sets, Burna Boy performs all his most popular tracks, proving time and time again that he's one of the best performers on the scene. Each show sees Burna Boy go through several outfit changes and shifting backdrops.

Burna Boy was born Damini Ogulu in Port Harcourt, Rivers State, Nigeria, in 1991 and began making music at just ten years old. As a teenager he honed his craft on Nigeria’s southern coast, delving into dancehall, reggae and Afrobeat’s. In the early 2010s Burna Boy emerged as one of Nigeria’s fastest-rising stars, combining influences from his Nigerian heritage with hook-filled pop stylings to create unforgettable tracks. His 2012 single ‘Like to Party’ broke into the global mainstream and paved the way for his full-length debut L.I.F.E, a year later.

Over the next five years, Burna Boy released two more albums and collaborated with a long list of high-profile artists including J Hus, Skales, Fall Out Boy and Lily Allen. African Giant was released in 2019 followed by his fifth album Twice as Tall in 2020 (which featured collabs with Chris Martin and Youssou N'Dour), both charted in several countries across the globe and garnered worldwide acclamation, with the latter winning a Grammy Award for ‘Best Global Music Album’. Breaking cultural boundaries, he became the first Nigerian to headline a show at New York’s Madison Square Garden, he released his sixth album, Love, Damini, earlier this year (featuring collabs with the likes of Ed Sheeran and Khalid).