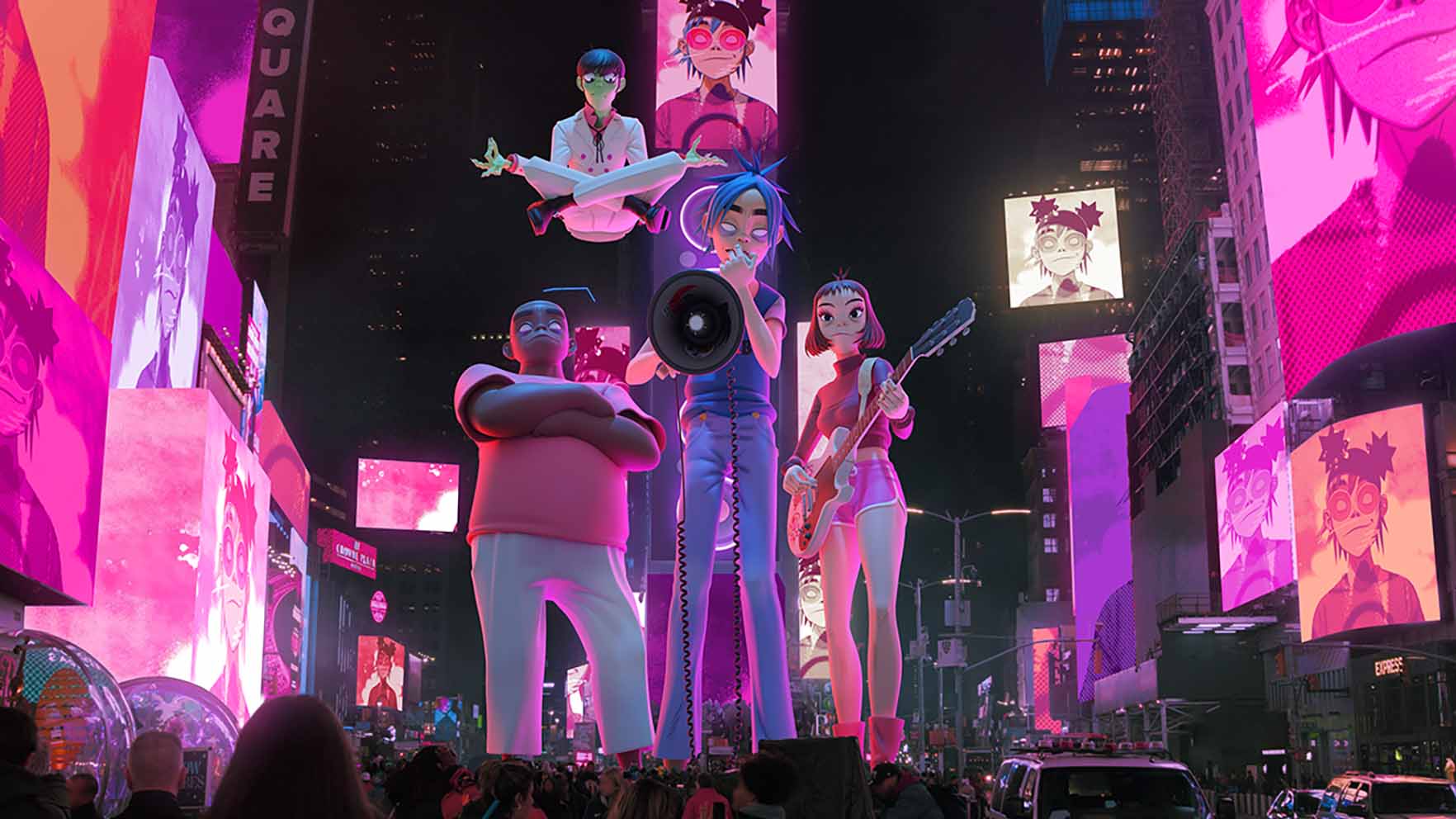 Gorillaz will revolutionise the very concept of musical performance, as they transform the streets of New York and London into stages for two groundbreaking performances of their brand new track ‘Skinny Ape’. Taking place at 14.30 ET on 17 December in Times Square and 14:00 GMT on 18 December in Piccadilly Circus, these first-of-their-kind immersive experiences will allow fans to gather together to witness Gorillaz play in real life - actually larger than life -  as Murdoc, 2D, Noodle and Russel literally tower over them, playing in the midst of two of the world’s most iconic skylines.

Directed by artist and Gorillaz co-creator Jamie Hewlett and the Emmy nominated director Fx Goby, the ‘Skinny Ape’performances are created by Nexus Studios and utilize Google’s ARCore Geospatial API, using AR to transforms public spaces with cultural experiences, bringing ‘Skinny Ape’ and the world of Gorillaz to life as never before.

Music’s most (in)famous virtual bass player Murdoc Niccals commented - “To all our followers, get ready for the biggest Times Square takeover since that other gorilla smashed the place up. Bigger in fact cos there’s four of us. Thanks to the techies at Google, we’ve created the music video event of the century, so don your pink robes and come see Gorillaz like you’ve never seen us before. The future is nigh!”

OUTFRONT and Ocean Outdoor are at the intersection of immersive experiences which bridge the physical and virtual worlds. Situated in the cultural heart of New York and London’s entertainment districts, Times Square and the Piccadilly Lights are the perfect portals to unveil the music video of the future.

Created by musician Damon Albarn and artist Jamie Hewlett, Gorillaz is singer 2D, bassist Murdoc Niccals, drummer Russel Hobbs and Japanese guitar prodigy Noodle. The BRIT and Grammy-winning virtual band formed following a collision of mishaps, meetings and pure luck to blow up a pre-digital world with their colourful backstory and ground-breaking virtual ways. Based at Kong Studios in West London, Gorillaz settled into a life of musical innovation with an eye-wateringly exciting roster of collaborators, a list that includes musical legends, geniuses and future stars from Elton John to Little Simz, MF Doom to Jean-Michel Jarre, Grace Jones to slowthai, Kali Uchis to Sidiki Diabaté, plus so many more. With seven albums to their name, Gorillaz (2001), Demon Days (2005), Plastic Beach (2010), The Fall (2011), Humanz (2017), The Now Now (2018) and Song Machine: Season One – Strange Timez (2020), Gorillaz is a truly global phenomenon, achieving success in entirely new and unique ways, touring the world from San Diego to Syria, Montevideo to Manchester and winning numerous awards including the coveted Jim Henson Creativity Honor.