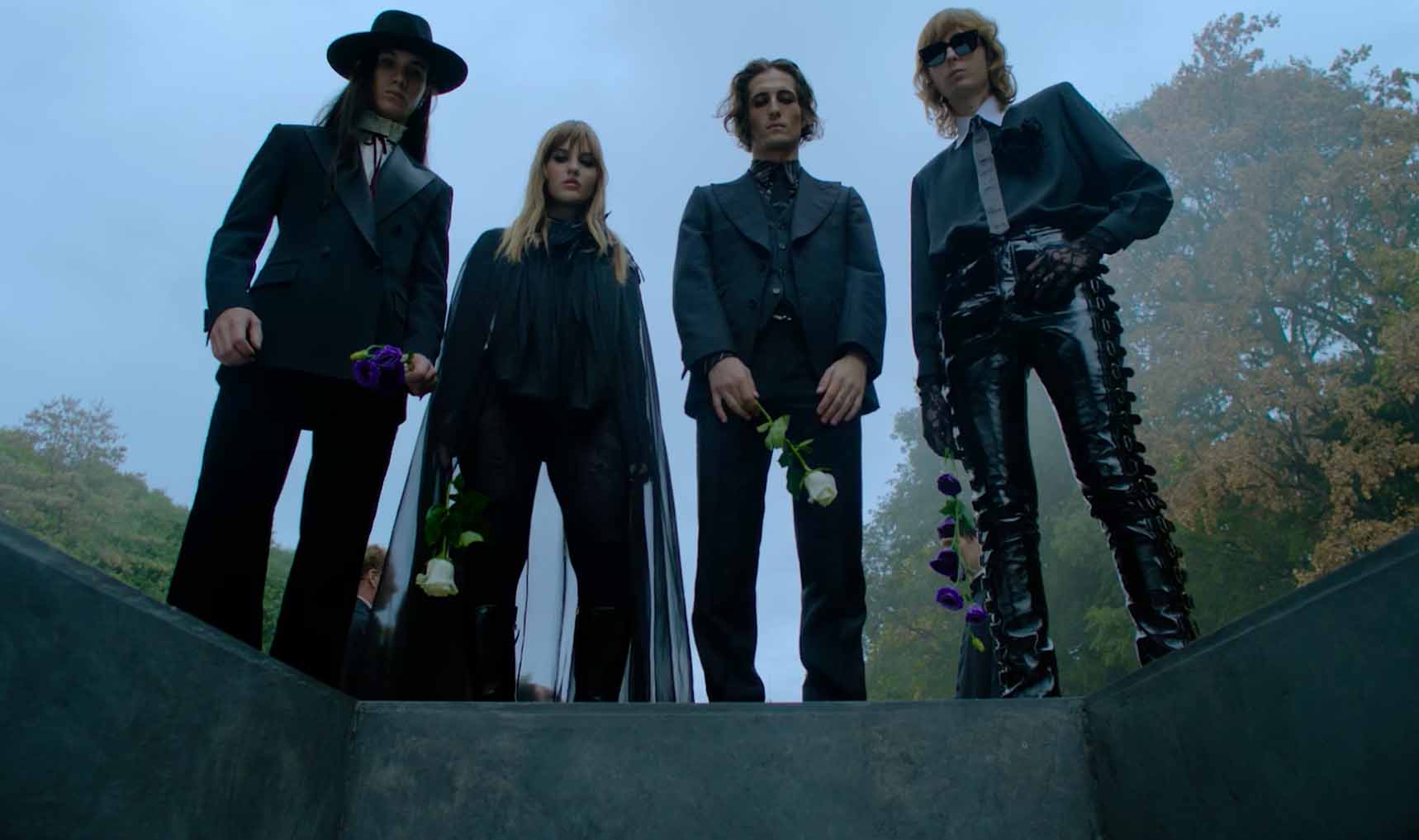 London O2 Arena Show For May 2023 Sells Out! Band Nominated For Best Rock At Mtv Ema’s 2022. Nominated For Group Of The Year (International) At Nrj Music Awards

(London - 12th October 2022) Today, global rock sensations Måneskin unveil the music video for their new single ‘The Loneliest’. Emphasising the deliciously dark heart of the track, ‘The Loneliest’ music video is rich in gothic cinematography. The video reinforces Måneskin’s relentless drive into the unknown and restless creative evolution. An all encompassing tribute to personal growth, the song also takes influence from the power ballad tradition forged by genre legends such as those they’ve been blessed to recently share stages with.

Alongside the release of the video, Måneskin today celebrate being nominated in the Best Rock and Best Italian Artist categories at this year’s forthcoming MTV EMA’s. The band won in the Best Rock category at 2021’s EMA’s and earlier this year won Best Alternative Video at the MTV VMA’s - the first ever VMA for an Italian artist. Måneskin have also today been nominated for Group Of The Year (International) at NRJ Music Awards in France.

Talking about the single, Damiano of Måneskin says: “We’re so excited for you all to finally hear The Loneliest. This song means a lot to me, it’s a personal song but I hope you can all relate to it in your own way. We played a tiny surprise show in London and performed The Loneliest live for the first time and your reaction meant so much to us! We’re having a whirlwind year touring the globe, meeting fans at gigs and festivals all over the world, from Japan to America to Europe and beyond, and we can’t wait to continue touring and releasing more music into 2023!"

Continuing to leave an indelible mark on the music landscape with a swagger and attitude all too scarce on the current scene, Måneskin are redefining what it means to be a rock band in 2022. Last week they sent fans in the United Kingdom into raptures as they performed new single ‘The Loneliest’ at a sold out show at The Underworld in Camden, North London. Announcing the show 24 hours in advance via their social channels, Maneskin ripped through a 45 minute set in the sweat drenched venue, giving their UK fans a night they will never forget. Subsequently, their May 2023 show at London’s O2 Arena joined a growing list of sold out shows as fans grabbed the last remaining tickets.

The 2022 has seen full-throttle, colossal headline shows and huge main stage festival sets and headline shows including Italy’s historic Circo Massimo which the band sold out and performed a stunning headline set to over 70,000 fans, Rock in Rio, Pinkpop, Rock am Ring, Summer Sonic, and many more. The band are also on the eve of embarking on their first eagerly anticipated, extensive headline North American Tour.

Adding to the band’s skyrocketing list of achievements, Måneskin performed their hit single ‘SUPERMODEL’ at this year’s MTV VMA Awards - a performance that proved too hot for live TV, with censors deeming the performance unsuitable for TV broadcast.

Måneskin are set to bring the LOUD KIDS tour to the U.S. this winter before returning to Europe and the UK in 2023.

“A Genuine Force… rejuvenating rock 'n' roll for the younger generation,” MÅNESKIN is a critically acclaimed four-piece-rock band that began busking on the streets of Rome as teenagers, and now just a few years later, are a razor tight group of captivating musicians widely hailed for being at the forefront of driving a worldwide resurgence of Rock music. The band has Over 289 certifications, including 44 Gold, 230 Platinum, and 15 Diamond. The past year has seen the band reach over 6 BILLION streams, while surging to #1 in numerous countries and across the Global charts of multiple digital platforms (including the #2 TikTok song of 2021). The band’s meteoric rise  has continued straight into 2022, as they performed on Saturday Night Live, were hailed by The Los Angeles Times as “America’s New Favorite Rock Band,”, won Best Alternative Video at the VMAs, Top Rock Song at Billboard Music Awards, Best New Alternative Artist at iHeart Radio Music Awards, various wins at National award shows in Japan, Spain, Poland, Hungary, and Finland, as well as over 19 nominations globally including the Brit Awards, NME Awards, Kerrang Awards, Swiss Music Awards, and more. They are also the first Italian band to have won the "Best Rock" award at the MTV Europe Music Awards 2021. This summer has seen MÅNESKIN contribute a distinctive rendition of “If I Can Dream” for ELVIS, the major motion picture and #1 charting soundtrack. Their Max Martin produced single “SUPERMODEL” has recently surpassed 150 Million global streams, appeared in the Top 20 APC in 17 countries, and remained #1 on the Billboard Alternative chart for 5 consecutive weeks. Simultaneously, the band’s reputation as the leading new generation MUST-SEE LIVE rock act builds each and every time they take the stage. The band have been dominating the world’s stages in 2022, with a city-stopping sold out show at Rome’s historic Circus Maximus, and huge appearances at Lollapalooza, Rock am Ring, Summer Sonic, Rock in Rio and many more.