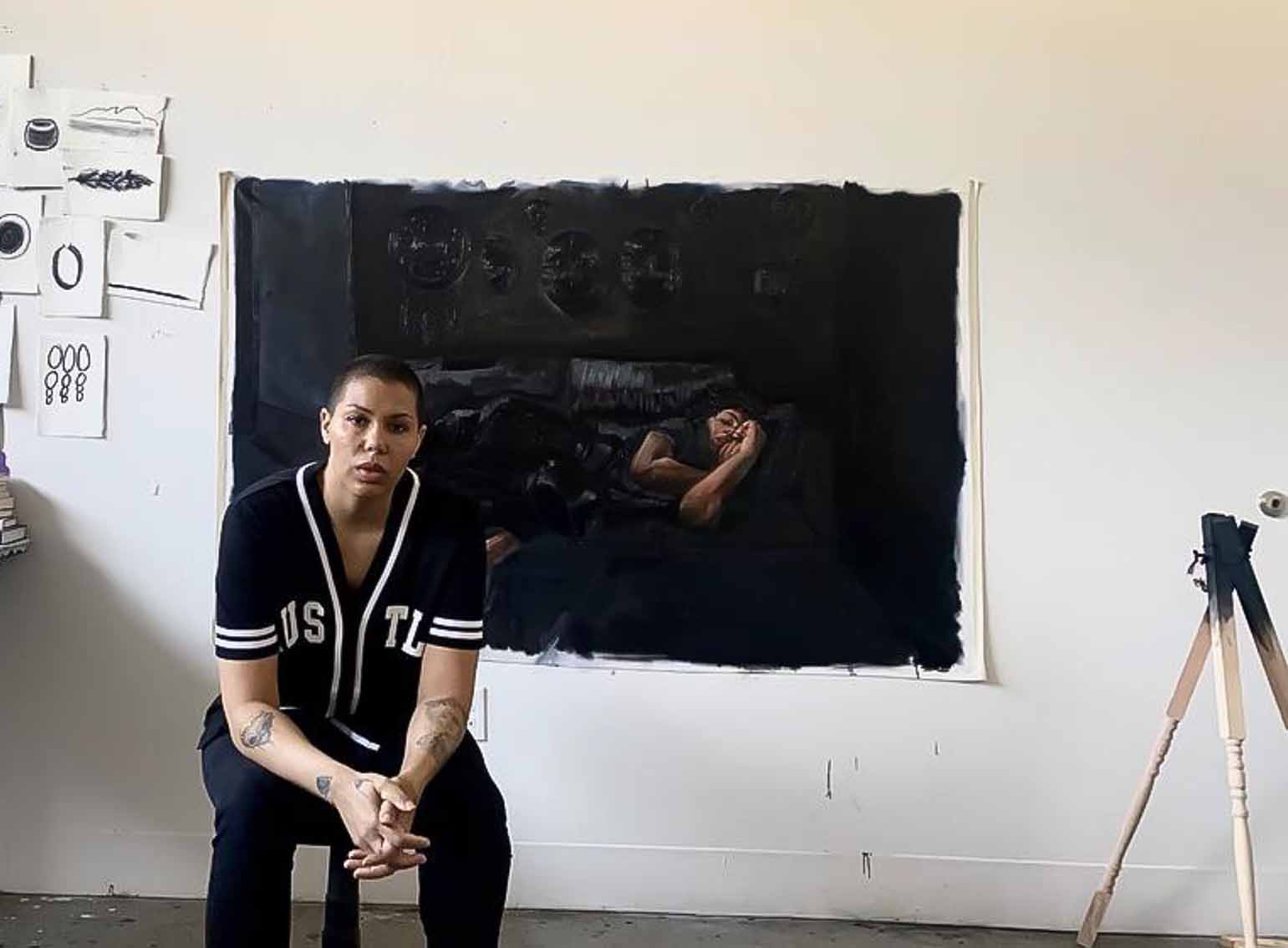 The artist’s debut solo exhibition in New York City will take place at the gallery in the Spring of 2023. Lemay’s work will be featured in the gallery’s booth at the upcoming edition of The Armory Show in September 2022.

In an exploration of identity, Natia Lemay (b. 1985; T’karonto [Toronto], Canada) paints figures in domestic spaces with strokes of black paint that alternatingly disappear into and shine forth from their entirely black backgrounds. Lemay sees black not just as a color, but also as a condition: that of being at once hyper-visible and invisible. This condition allows for a dual legibility of the artist’s paintings: as external conditions shift, such as lighting or proximity of the viewer, the work metamorphizes, oscillating between representational portraits and minimal studies in black.

On the tactile surfaces of Lemay’s paintings, figures flit between invisibility and prominence, at once submitting to and resisting the pull of their surroundings. The artist’s work is a study of social reality but is simultaneously deeply personal: her subjects are self-portraits, versions of herself from different points in her childhood. During these formative years, Lemay became aware of her otherness as a mixed-race, Afro-Indigenous woman living in Canada; not fitting squarely into any group, the artist felt the weight of being hyper-visible to those around her, few of whom resembled or understood her. The artist explores her own experiences of hypervisibility by calling upon ancestral histories of trauma, particularly those of Black enslaved people surveilled and incessantly monitored as a means of total control. Accompanying this hypervisibility is its opposite: invisibility – the result of the ongoing erasure of Black and Indigenous people from history to destabilize those communities and mythologize colonial identity. Collecting these experiences and feelings that have permeated her life, Lemay builds spaces from black where figures find agency within shifting forms: places where they can acknowledge and make space for their traumas.

The worlds of black that Lemay paints in her work allow her to articulate new notions of home. The artist often works on wooden surfaces or includes likenesses of wood within her compositions. This inclusion of natural materials such as wood or trees more broadly, is a meaningful reference to the artist’s understanding of what a home can be: not a singular fixture, but rather a place that is built and rebuilt, sometimes with on the barest resources at hand. Growing up in Winnipeg, Canada on Treaty 1 Territory, wood and stone carried great significance for the artist, who would help her sculptor father carve life from these materials. The objects they created, small as they were, are what fostered a sense of home for the artist and formed her appreciation of the earth’s natural resources and the significance of collaborative creation. In her paintings, Lemay often uses wood to regenerate her idea of home: complex but deep places containing the embodied knowledge of her ancestors, where material, color, and personal history come together to form cavernous expanses of possibility.