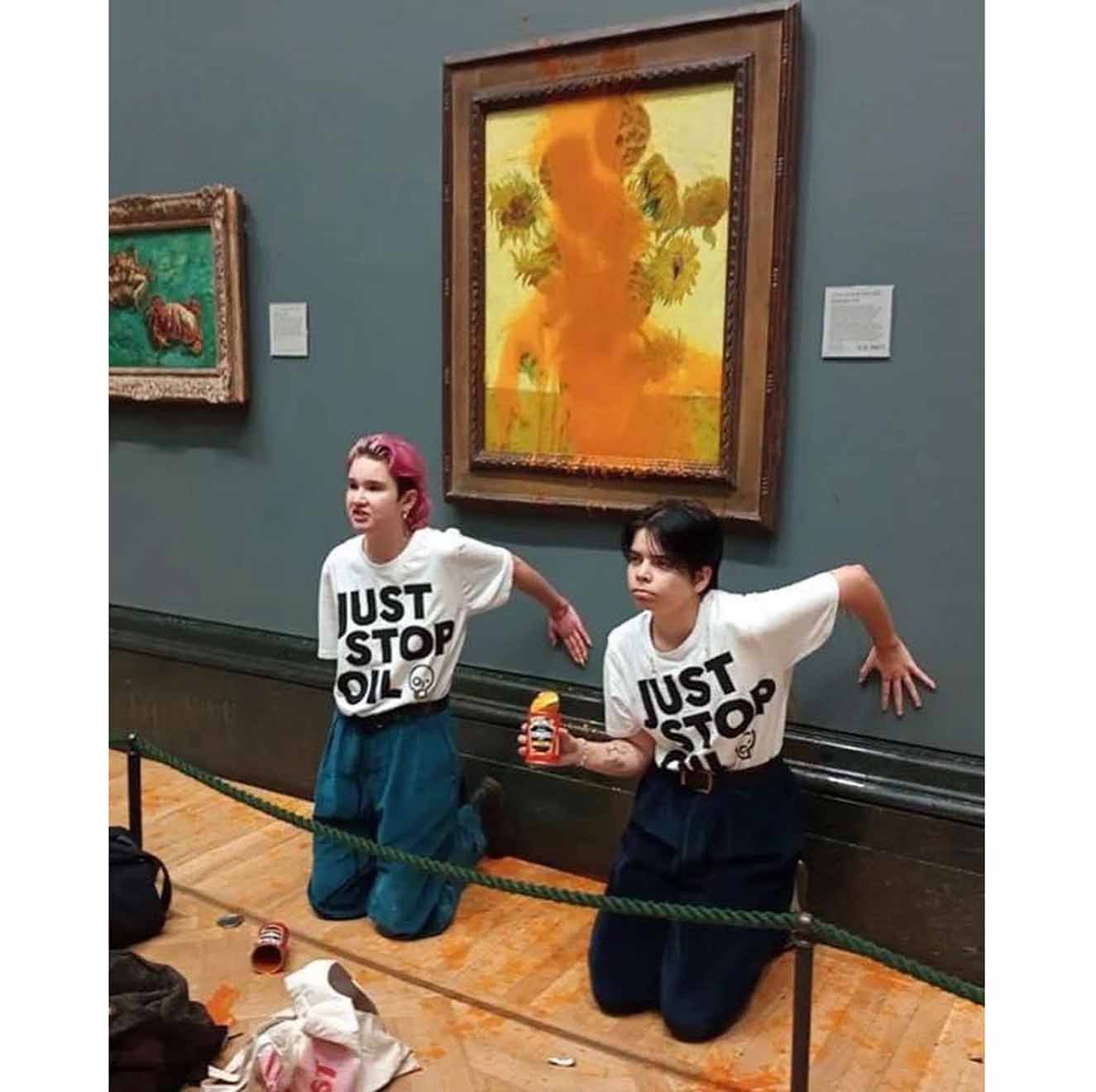 We should stand with these demonstrators even if we disagree with their methods.

The protest organization Just Stop Oil, which is pushing for an end to new fossil fuel licenses in the UK, has had a busy weekend. It all began on Friday at the National Gallery when two protesters stuck themselves to the wall by sticking tomato soup on Van Gogh's «Sunflowers» painting. The demonstrators were later detained for aggravated trespass and criminal mischief despite the fact that the painting was shielded by glass and unharmed. On the same day, protesters painted the Metropolitan Police headquarters in the color orange. On Saturday, 29 members of the group stopped a road in Shoreditch.

Another group member sprayed an Aston Martin dealership with spray paint on Sunday, while two activists successfully blocked the Queen Elizabeth II Bridge in London earlier today, generating miles of traffic in both directions and preventing oil tankers from Essex from passing. However, there should be a foundation of solidarity wherever this occurs—something that has sadly been absent in most of the response. Following the protest, many users on TikTok and Twitter asserted with confidence that it was a psy-op carried out by the oil business itself to discredit climate activists. The argument for this is largely supported by the fact that Just Stop Oil has received funds from The Climate Emergency Fund, an organization with offices in Los Angeles that was established by Aileen Getty .

It makes sense that this might raise suspicion, but Getty is a well-known donor to environmental advocacy and has long opposed the use of fossil fuels. Her family has also avoided working in the oil sector for many years, and she is open about where her fortune comes from. Similar to this, others have claimed that because «mummy and daddy will pay for their legal bills,» these demonstrators won't be subject to the full force of the law. James Cleverly, a tory member of parliament, tweeted: «I'm just wondering what the reaction would be if a couple of black youths from Lewisham had thrown soup on a Van Gogh or spilt milk all over the floor at Harrods.» He has a point, but it's remarkable that a government official would make such a statement when a recent report was published disputing the existence of institutional racism in the UK. It is true that white middle-class individuals frequently experience less difficulty when dealing with the criminal justice system, but precisely because of this, it is advantageous when they put their lives in danger.