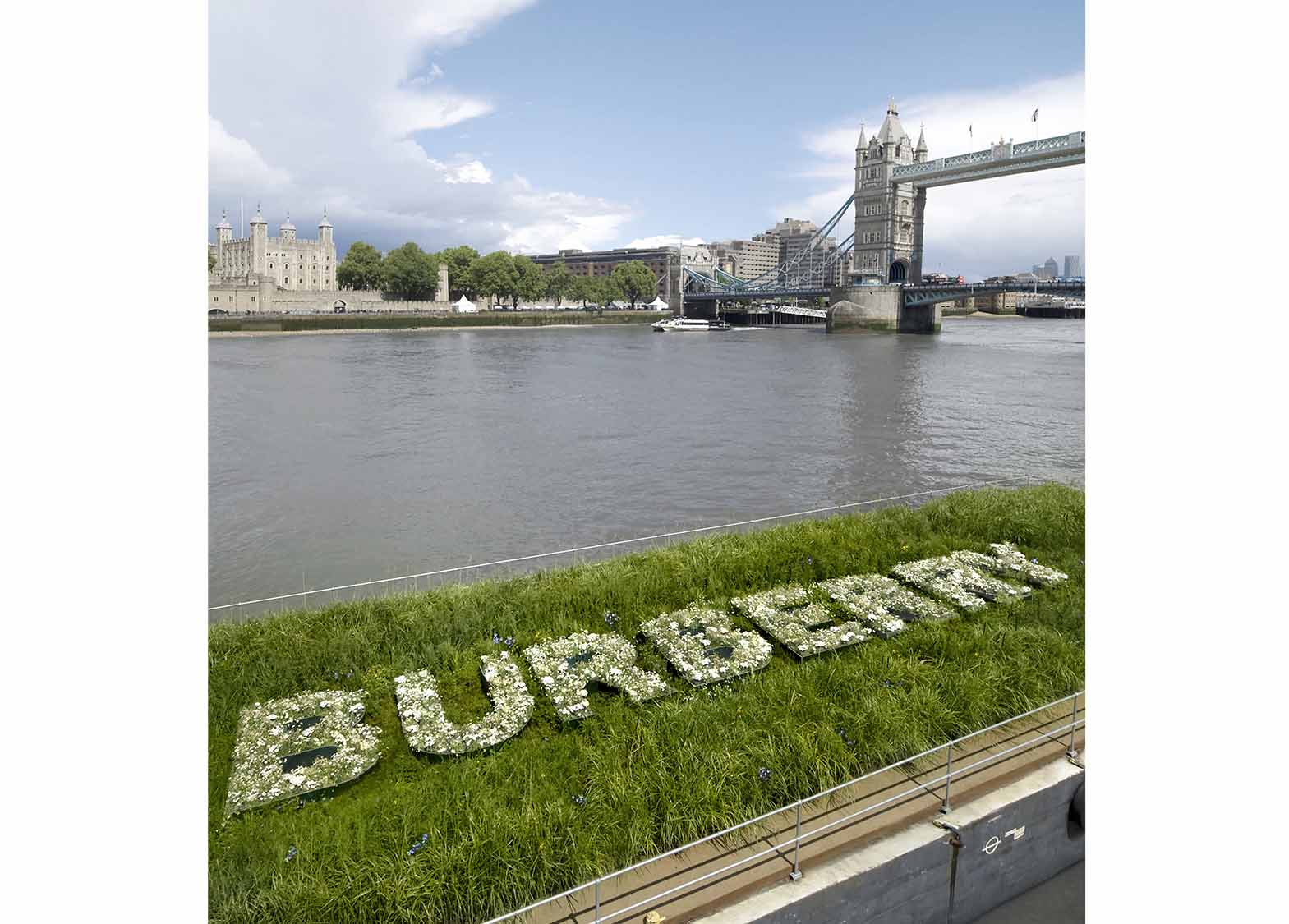 As an official platinum partner of The Queen’s Platinum Jubilee Pageant this June, Burberry is celebrating Her Majesty’s 70 years of service with a series of special celebrations

From supporting Superbloom and launching a zero-waste floating meadow, to releasing a commemorative Jubilee scarf and Jubilee artwork campaign celebrating the past with the creatives of the future; all honour the storied heritage of Burberry’s home country, Great Britain, and the momentous reign of Her Majesty Queen Elizabeth II.

Burberry is partnering with Historic Royal Palaces to support Superbloom, an immersive floral display which will encircle the Tower of London in honour of The Queen’s Platinum Jubilee.

As lead sponsor of the project, Burberry is contributing two original and immersive outdoor installations, including a large floating meadow, which will be moored directly across from the Tower of London on the River Thames and created in the image of the Burberry logo. In addition to this, Burberry is also contributing an art wall crafted in collaboration with digital artist Jon Emmony.

Designed to celebrate flora, fauna and the pollinators that will benefit from the project, the Burberry Floating Meadow is a zero-waste installation that acts as an extension of Superbloom, highlighting both the critical importance of biodiversity to the world, as well as the brand’s commitment to tackling the climate crisis.

Comprised of over 5,000 plants, many of which are indicative of English river ecosystems and often found on riverbanks such as the Thames, the meadow highlights the role natural grasslands and marshes play in storing carbon, and that flowering species play in providing food and nectar to pollinators and common riverside wildlife. The materials used to build the garden include 1.4 tonnes of recycled plastic collected from rivers.

Every element of the floating meadow is responsibly sourced and will either be reused, repurposed or recycled. All plants will be replanted by Burberry volunteers and live on in local community projects after the installation has closed, including within The Listening Space at the The Caversham Group Practice in Kentish Town. The floating meadow maps have also been created from seeded paper and vegetable inks, allowing visitors to plant and create their own meadow from home.

The creation of the Burberry Floating Meadow reflects Burberry’s commitment to protect, restore and regenerate nature around the world as part of their efforts to tackle the climate crisis.

Envisaging our future world – rich in biodiversity and shepherded by nature – Burberry has partnered with digital artist Jon Emmony to create a utopian vision inspired by the power of Superbloom and the dynamism of animals and pollinators of British woodlands.

An embodiment of Burberry’s belief that creativity opens spaces and a reflection of their sustained commitment to protecting biodiversity, the Burberry Art Wall is situated at the entrance of Superbloom at the Tower of London and encourages a new generation of creatives to explore the future of our world through limitless

To further mark this momentous occasion, Burberry has also created an exclusive commemorative scarf in honour of The Queen’s Platinum Jubilee.

A celebration of the brand’s British heritage and rooted in exploration and the outdoors, the scarf is hand-illustrated with motifs inspired by ancient British woodlands and the flora and fauna that live there.

Yew trees, bluebells, butterflies and squirrels are joined by birds representing each of the four British nations: a robin for England, capercaillie for Scotland, sparrowhawk for Northern Ireland and golden eagle for Wales.

During the creation of The Queen’s Platinum Jubilee silk square scarf, Burberry further reflected its commitment to their biodiversity strategy by donating to the Woodland Trust to support them in creating a United Kingdom rich in woods and trees, for both people and wildlife.

Available online as well as in selected Burberry stores around the world, The Queen’s Platinum Jubilee silk square scarf will also adorn Burberry store flags and windows in the City of London for the duration of the Jubilee celebrations.

In addition to the initiatives highlighted, Burberry has also teamed up with the next generation of creatives to honour Her Majesty’s 70 years of service.

Earlier this year, Burberry hosted a workshop at Armley Park Primary School in Leeds and invited students to create artwork and messages for The Queen in honour of this remarkable milestone.

Each drawing or message has been enlarged and displayed on over 80 bus stops throughout the city of Westminster, near to where the Platinum Jubilee Pageant will take place, bringing the students’ inspiration to members of the public at this historic moment.

Armley Park Primary School is a beneficiary of Burberry’s partnership with Marcus Rashford MBE, the National Literacy Trust and Macmillan Children’s Books to help young people develop their literacy skills. As part of this, Burberry is providing funding to transform library spaces in ten schools most in need across Manchester, Liverpool and London, ensuring children have access to safe environments and resources to develop their potential.