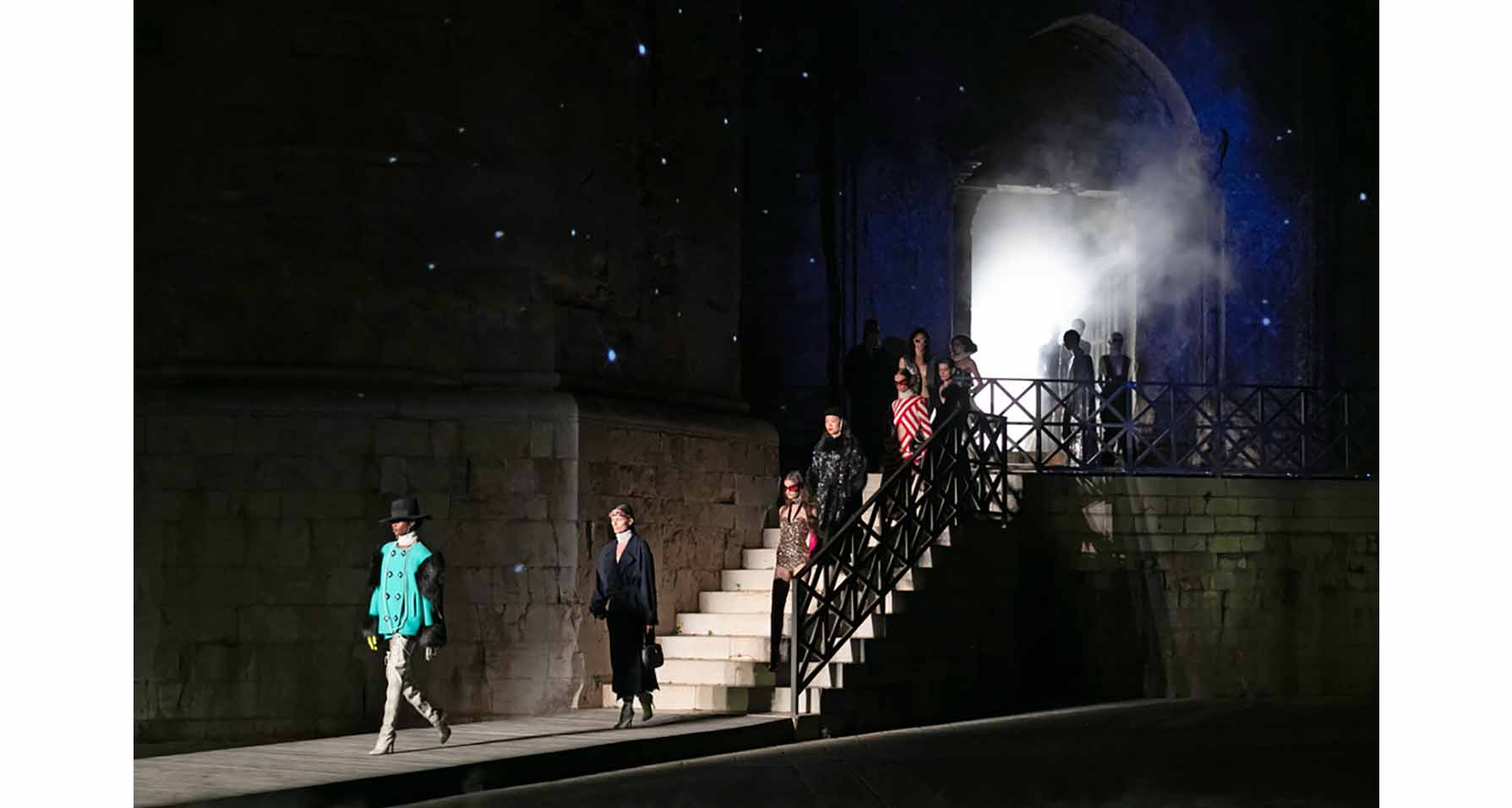 Set against the magical backdrop of Castel del Monte, Apulia, the show gathered international stars from every corner of the world, including muses Dakota Johnson, Paul Mescal, Jodie Turner-Smith, Lana Del Rey, and Eurovision sensation Måneskin, on a lunar eclipse to remember

Creative director Alessandro Michele did it again. After taking over Hollywood Boulevard during Gucci Love Parade last autumn with the likes of Jodie Turner-Smith, Jared Leto, and Macaulay Culkin appearing on the catwalk, the mastermind behind the Italian house just staged yet another unprecedented fashion show. Bringing together some of today’s most exciting celebrities, from Dakota Johnson and Paul Mescal to glam rock band Måneskin, Gucci Cosmogonie was hosted by the 1240s Puglian fortress Castel del Monte: a unique location that made the lunar eclipse of May 16 — when Gucci’s new collection was unveiled — even more suggestive.

Inspired by the unconditional bond that united intellectuals Hannah Arendt and Walter Benjamin shortly before WWII, Gucci Cosmogonie draws on the heartfelt correspondence between the two, as well as on the essay Arendt wrote on her late friend in 1968, to revive their legacy and prove their relevance in relation to today’s socio-cultural scenario.

In her homage to the German thinker, Arendt described Benjamin as “a precious Pearl Diver”, radical and unconventional. Retracing the moments that preceded Benjamin’s passing on September 26, 1940 — when he took his life at the Franco-Spanish border while attempting to escape the war by moving to America — the philosopher explains how, for Benjamin, losing his library and manuscripts at the hands of the Gestapo equaled losing the reason to carry on living.

“How was he to live without a library, how could he earn a living without the extensive collection of quotations and excerpts among his manuscripts?” she pointed out in her essay. It is this very question that inspired creative director Alessandro Michele to build his Gucci Cosmogonie. Dwelling on Benjamin’s ability to identify, re-interpret, and illuminate connections — “Benjamin is a collector of quotations. He discovers them from the depth of the sea and he brings them back on the surface of the water, as rare and precious pearls” — he describes the eclectic thinker as “the paradigmatic figure of those thinking in constellations”.

As Michele explained in a statement ahead of the show, “the constellation for Benjamin is a sudden apparition. It is what comes out of the capacity to draw conjunctions between fragments of worlds which would otherwise be dispersed: a feverish dust of quotations that burns in the possibility of a contact.”

Given the inspirations that shaped its development, it comes as no surprise that the Gucci Cosmogonie collection connected the dots between the past, present, and future of the Florence Maison. Characterised by superfine attention to detail and impossible-not-to-notice finishing touches — Elizabethan neck ruffs, wide-brimmed hats, and constellation-like patterns — from hypersensual evening dresses to distressed denim jeans and voluminous oversized jackets, passing through retro jumpsuits featuring geometric motifs and sequined tops with knight-like hoods.

In short, the show was a contrasting, highly entertaining celebration of Gucci’s evolution through the years which drew on the house’s past to explore its ability to reinvent itself in the future. “If any thinker was able to keep together things that were so distant in time and space, rearticulating them into bursting constellations, it was Walter Benjamin,” stressed Gucci's creative director in a statement. “To this man, who couldn’t survive without his quotations, my gratitude.”