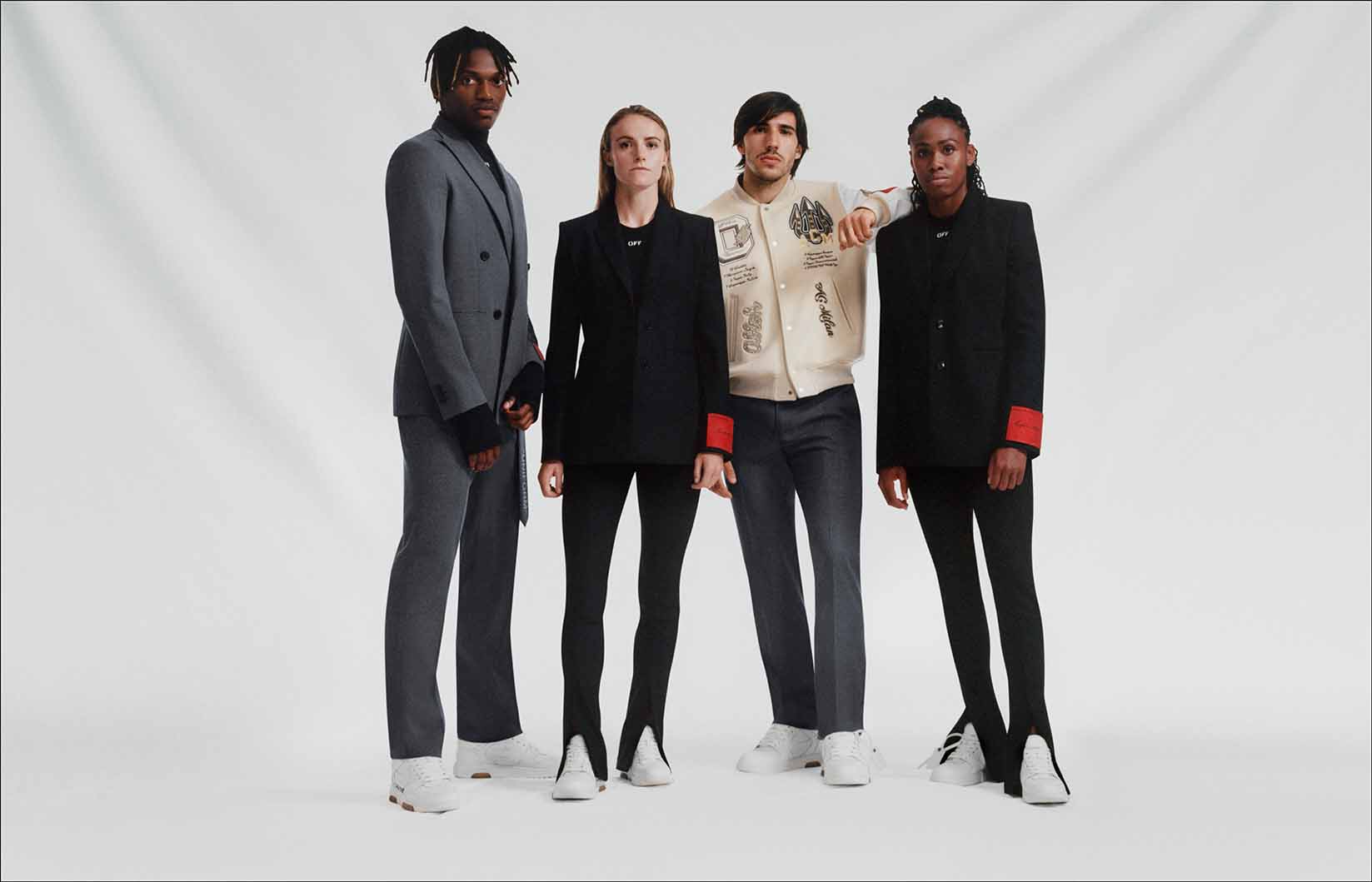 On the heels of announcing the Style and Culture partnership with AC Milan, Off White™ reveals its first off-pitch uniforms — one formal, one informal — for the Italian football club.

These humanistic tenets are reflected in the uniforms, which are designed for members of both the women’s and men’s AC Milan clubs, with variations in tailoring and fit adapted to the respective teams. Constructed from grey suiting, the formal uniform debuts a double-breasted jacket that appears classic from the front, while the back reveals two sporty vertical tonal stripes and a player’s uniform number. Matching suit-style pants introduce split cuffs and a statement tag on the left leg that, with trademark Off-White™ satire, defines the garment with a “Uniform” quote.

The informal uniform retains the pants, shirts, and accessories of the formal uniform but replaces the suit jacket with an Off-White™ style hallmark championed by the brand’s founder Virgil Abloh: a Varsity jacket. For AC Milan, the Varsity jacket is crafted from white leather and introduces graphic patches, including Off-White™ stripes down the right sleeve and the A.C. Milan diavolo mascot on the body. Player names appear on the back.

Abloh’s influence as well as the partnership’s greater aims also explicitly appear via a red tag that adorns the left sleeve cuff of both the suit and varsity jackets. Each tag pairs the “I Support” vernacular introduced by Abloh in 2020 with a pledge selected by its wearer. Ranging from Diversity, Equal Rights, and Freedom of Speech to Education for All, All forms of Love, Social Justice, and beyond, these critical causes and customized “I Support” messages encourage the AC Milan players to physically represent and support the future-forward causes they most believe in every time they step out in the uniforms.

The pledges also underpin the “Wear Your Heart on your Sleeve” campaign that commemorates the partnership and showcases the new uniforms. Shot by photographer Campbell Addy, the campaign features 10 members of the AC Milan club: Valentina Bergamaschi, Laura Giuliani, Lindsey Thomas, and Christy Grimshaw of the women’s team as well as Rafael Leão, Sandro Tonali, Simon Kjaer, Mike Maignan, and Fikayo Tomori of the men’s team.

While the uniforms are exclusive to AC Milan, Off-White is celebrating the partnership by offering the Varsity jacket for pre-order purchase for the first weeks of the “Wear Your Heart on your Sleeve” campaign, from October 11th to October 23rd. The jacket will be available only on www.off---white.com, with part of proceeds donated to Fondazione Milan, AC Milan’s charity foundation. Using the values and power of sport, the foundation works to provide young people — especially the most vulnerable and those in poverty — the opportunity to grow and develop their talents.

‍Established in 2013, Off-White™ is defining the grey area between black and white as a color. Under the brand name, seasonal men’s and women’s clothing collections, objects, furniture, and publications are articulating a current cultural vision. Collections are embedded in a recurrent backstory, with an emphasis on creating garments that have an identity by design.

With a design studio based in Milan, Italy, the label harnesses the country’s history and craftsmanship, yet offers a global perspective on design and trends. With a clear vision of splicing the reality of how clothes are worn with the artistic expression of high-fashion, creative director and designer Virgil Abloh explored concepts in the realm of youth culture in the contemporary context.