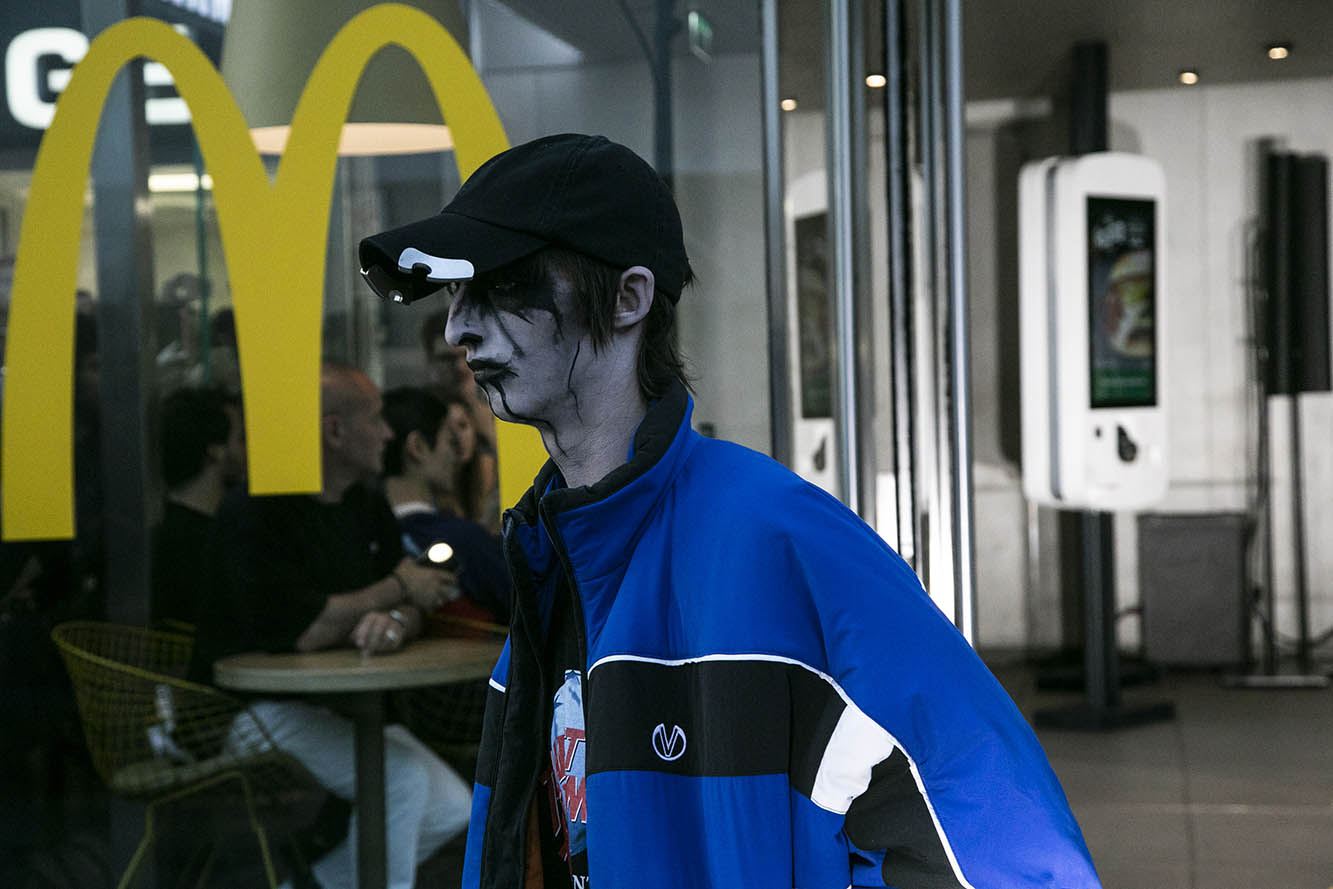 The first guests arriving at last night’s Vetements menswear show must have thought they showed up to the wrong place entirely. Lured to the biggest McDonald’s in Paris via an invite that consisted of a branded condom, attendees took their seats around the restaurant with McFlurrys in hand: but for all the tongue-in-cheek theatrics staged for their spring/summer 2020 collection, it ended up being one of the brand’s most overtly political collections to date.

Demna Gvasalia has never shied away from journeying into the heart of darkness of 21st-century corporate life. From the DHL-branded t-shirt that made Vetements a viral sensation, to the Balenciaga autumn/winter 2017 collection that showed hoodies printed with the Kering logo – the luxury conglomerate that owns the label – Demna has always played with the codes of workwear in a way that feels wilfully subversive.

And from the first look, Demna made it clear this attitude was back in force. A typically off-beat casting choice saw a middle-aged cast guy play a security guard who looked like he clearly fell down the Vetements rabbit hole by accident,(but was ofcourse very thought out!) wearing padded shoulders and knee-high boots with black "police” leg pads.The second look, on the other hand, was an oversized short-sleeve shirt printed with the classic meet-and-greet sticker, “hello my name is”. What was the name? Capitalism, of course. Meanwhile, the white-collar worker tie and trousers were given a perfectly Demna twist with Vetements-branded flip-flops and toenails painted in eye-popping neon yellow. Naturally.
‍

While there were plenty more riffs on Vetements’ trademark chopped-and-screwed logomania (see also the denim jackets printed with the debased emblem of BOSE audio equipment, and tees that bore Demna-ified versions of Heineken beer and PlayStations) there was, most interestingly, something more profound hovering below the surface, with some of the most explicitly political messaging the brand has ever put forward.

The phrase “global mind fuck” was embroidered onto shell suits over a crescent moon; in a moment of political turmoil across the world, Demna’s response has always been to present hybridised garments that pervert the codes of bourgeois dressing. But most forthright of all was a t-shirt shown in the final section that read ne tirez pas, which translates colloquially from French as “do not shoot”. Above it were the same words written in Arabic: as Europe continues to grapple with the implications of mass immigration (and Demna himself’s place as an expat from the post-Soviet state of Georgia) it was a sobering reminder that showing in a McDonald’s is more than a gimmick. It’s a tribute to the thousands of people who work behind the scenes but continue to be overlooked by the European political establishment.

What made this political messaging especially potent, however, was that it also accompanied a return to form for Demna with a range of desirable clothes that will instantly get pulses racing within the brand’s loyal fanbase. It was a confident showing recalling the early Margiela shows that took fashion out of its rarified bubble and onto the streets of Paris, firing on all cylinders to offer a surprising new blueprint for Vetements’ future: a more thoughtful, democratic vision, and one that – despite what the location might have initially suggested – was refreshingly free from irony.