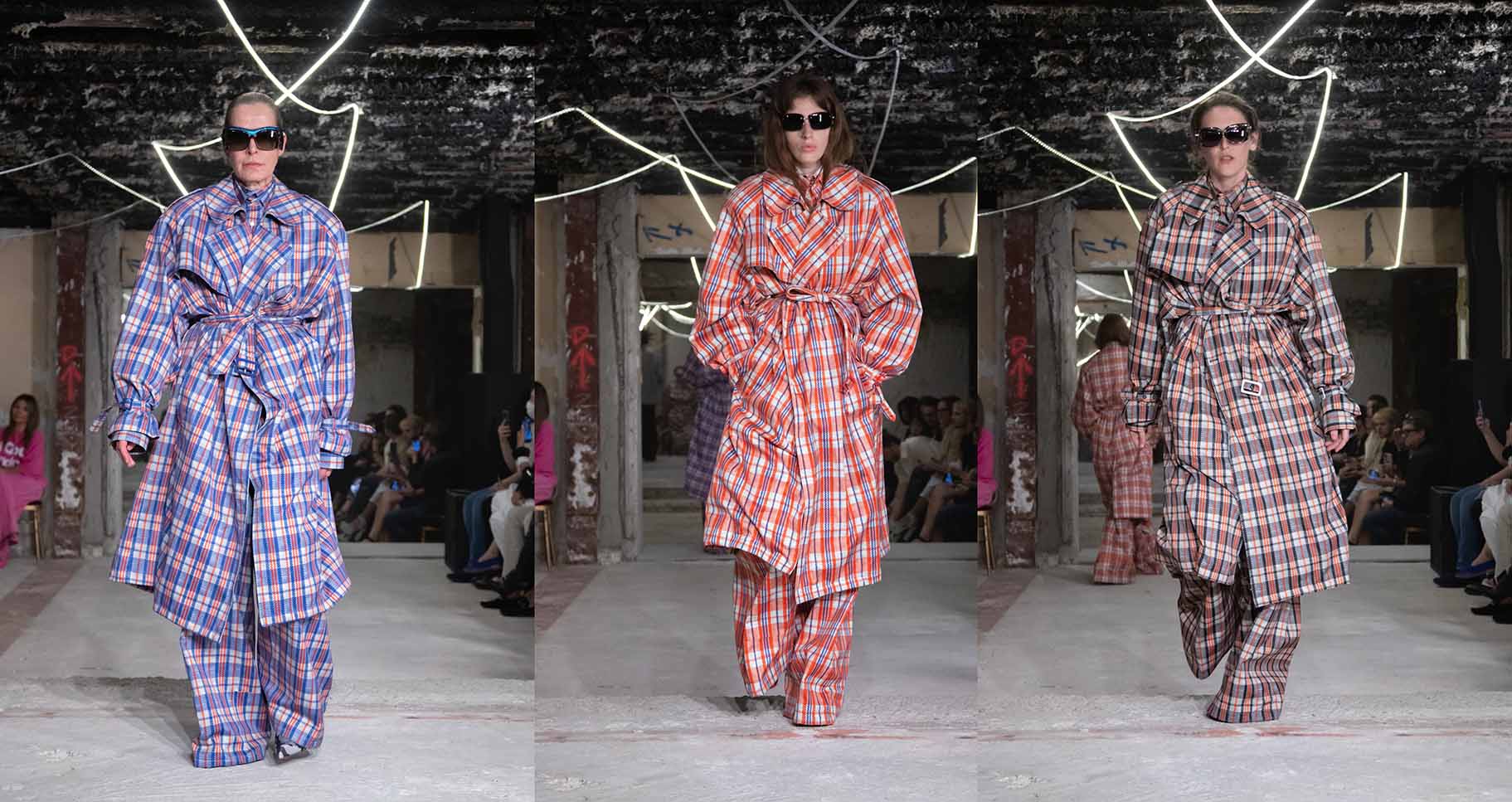 “This collection is very personal to me. It’s my first physical VETEMENTS show as a Creative Director. It’s a summary of my childhood memories, war trauma, hidden desires and twisted imagination.

There was this one toy I had when I was a child, everything else got destroyed during the war. That one toy was a deformed version of a teddy bear, that was old and patched, as a patched brown shearling look in the show, after getting replaced by a troll figure in the pink-red dress.

There are check blankets similar to those we got at refugee camp to wear instead of outerwear, as we couldn’t take anything with us. They were what kept us warm when being forced out of our homeland.

When I was a teenager I wanted to be a punk , something I knew my family would never approve of, so I would fantasize about it on the bus to school. I would also picture other people on the bus looking completely different from how they looked, I would imagine them with crazy spikes, feeling like there is a punk in each of us, or with hair dipped in silver. I would imagine my boy classmates in fancy evening gowns, rocking high heels, I would imagine the fancy life with Couture gowns, as I thought that was a place so far away from war, so far away from death.

When I was 5, I fell in love with Kim Basinger, I thought she was the most beautiful woman in the world. That year my cousin got her first Malibu barbie, and I bought it from her, from all the savings I had from my birthdays, and Christmases. At night when everyone would sleep, I would take her out of a hidden place, and make dresses for her, without knowing what design or fashion was. Today parents are understanding when their 5 year old boy wants to play with Barbies and not cars, when I was growing up, in extremely conservative Georgia, that was definitely not the case. As a tribute to that memory, Ireland Baldwin, the daughter of Kim Basinger is walking the show.

Soon after getting my first Barbie, I discovered that there was this TV programme every Sunday that for 7 minutes would review the gossip from around the world and for 2 minutes out of them show fashion. This was the most exciting thing and my whole week was about these 2 minutes of

fashion I could watch. And the music... there was this music that so many years later I still can hear in my head. So for my first show, I wanted this music, and somehow I managed to recreate it on the piano.

There was in my life time of depression, where you feel you don’t want to do shit today, time of being a gamer, trying to escape the reality, and time of starting to live on my own, and accidently washing all my clothes with bleach.

And there was my grandmother, with her morning gowns and Zebra printed dresses till the floor, and with her red lipstick, the first thing she would put on every morning, even during the war and after in the refugee camp.

Creativity comes from the lack of the means. As we couldn’t afford nor find any fabrics during the war time, I would take these cheap bags, cut them and make designs out of them. My first design patterns came in these blue, red and black check. Later on I realized what I was making my first garments from, was a knock-off version of the iconic Tati bag. So when I was told Tati went out of business, and will be demolished, I knew my first show had to be there.

Prior to coming out as the Creative Director of VETEMENTS, I showed my first collection for the brand in December last year, all masked looks; masks as a protection, of what’s inside, masks as a protection of the world that sometimes can be very brutal, especially being LGBTQ and growing up in a super homophobic environment. Everyone expected me to continue this season with this signature move of covering all faces, but once I fitted the casting, I removed all the masks that were in the show, I wanted to show their faces, tell their stories through my clothes.

After all I’ve been through in my life, the good and the bad, I truly believe there is a higher power that protects us and loves us. The only thing is to believe in yourself, even if you are a boy from the middle of nowhere, ripped of your childhood and many other things, that one day dreams can come true. There is always an Afterlife; life after the pandemic, life after the war, life after life after life...”