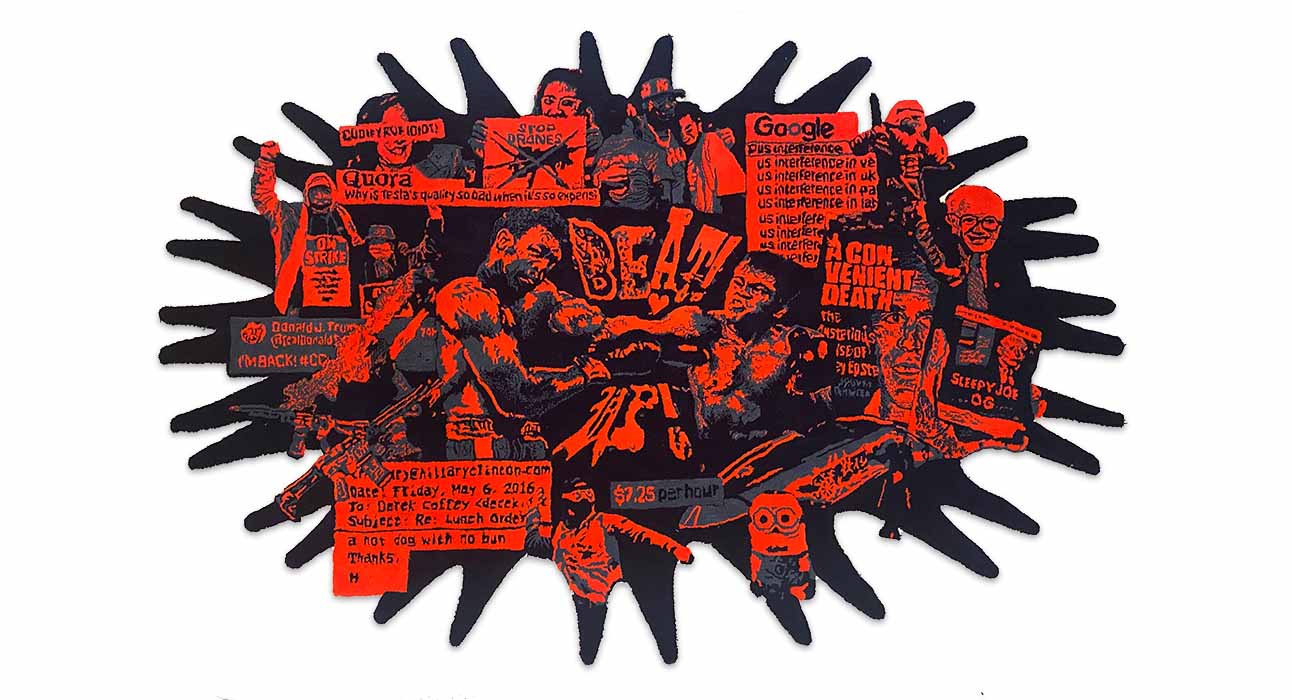 At the intersection of handcrafted labor and aesthetics, it was almost inevitable that the resurgence of tufted rugs face an attempted coup by hobby-happy millennials and Shein-addicted TikTokkers with an egregious affinity for clip art. One tutorial video and a couple of Etsy purchases are, essentially, all it takes to start tufting, and so, the renaissance of such rugs took hold, only exacerbated by the artisanal impulses brought on by the pandemic.

But just because a practice has been appropriated, does not mean it can’t be smartly, and appropriately, reworked for the modern era. For Angela Anh Nguyen, the history and context of rug-making in this form are held in the same regard as—and often bleed into—concepts for the pieces themselves. There’s a slowness to tufting that drives its appeal for both producers and consumers. Extensive time breeds limited availability, which usually breeds desire. But with many of those who have recently come into tufting, the time spent on work is not matched in the time spent on concept. Detaching from popular tufting directions, Nguyen’s rugs are rooted in storytelling, using irony, exaggeration, and hypocrisy to center working class sentiments. Bridging the plush comfort of functionality with the intellectual appeal of fine art, her work indulges in the yearning for touch that brought on the era of new age tufting, without compromising morally-minded practices.

Ahead of an upcoming exhibition at The Armory Show with Albertzbenda, the artist joins Re-Edition magazine to discuss her practice.

‍Megan Hullander - How did you first get introduced to tufting?

‍Angela Anh Nguyen - I began tufting around the same time as the many others who have come up on this tufting “renaissance”  in late 2018, and learned how to do the practice with a friend. We came across videos of tufting and were interested in pursuing it—so as you can imagine we watched videos, studied the technique, built a frame, and tried it out through trial and error. The core of this new age tufting renaissance revolves around a process that is DIY or self-taught. Tufting has, however, existed for ages. According to every single rug manufacturer and business I have spoken to in the greater Los Angeles area, tufting is actually sort of the “taboo” of the rug making options—weaving, punch needle, loop stitch, hand knotted. Through my practice, I have discovered that there is some disconnect between the new and old age of tufting. There are critiques on the material, the finish, and the process itself for reasons both valid and limited in scope. I’m obviously still learning so much, as I have only been doing this for four or so years, so I owe it to myself and the practice to learn as much as I can about the history, and those who came before me who specialize in laborious rug making.

‍Megan - Where do the concepts for your pieces usually stem from?

‍Angela - Concepts stem from current events and discourse, and dull thoughts and everyday insignificance. I never really have a full idea of what I want the piece to look like. I begin the design process with a shape and theme, then fill in the shape with different images I find online that accurately reflect what I am trying to portray. At times, I can work on a design for ages and scrap it. Other times, I hate what I am designing and I come back to it a week later and complete it. The design process can vary from hours to days to months. I am incredibly unstable as an artist.

‍Megan - Where does the functionality of a rug serve your art in ways that wouldn’t translate if they were produced in the form of a painting or a print?

‍Angela - I have to consider how the piece would support the other goods that it will eventually live with. Not all of my rugs are going to end up living in an infinite white gallery. At least, I do not intend [for] them to—that sounds boring. It’s going to lay under a coffee table, a couch, some side tables, or hang out beside a bookshelf. What feels special about my work that does not translate to a painting or a print is the need to engage with the piece. As it sits on the floor, you should step on it daily, maybe spill some candle wax on it, or have your buggy eyed pup drag its butt over it. You aren’t just passing it on your way out the door. The rug and its owner are aging together.

Some textile artists intend for their work to sit on the wall, I just happen to not prefer it. Obviously if someone buys my work, they can do whatever the fuck they want with it. But the purpose of my rugs is to sit on the floor and I hope that they do that!

Megan - How does Los Angeles factor into your practice? ‍

‍Angela - I try to incorporate LA life into every rug I make. I always throw a Dodger in my rugs or some iconography reflecting the community. More than anything, the thematics are largely influenced by my experience living in this city, whether that be as a working class person, an artist, an academic, a sports fan, a consumer, a producer.

‍Megan - Have any of your pieces been around long enough for you to seem them age? Does the concept of permanence, or lack of it, come into play with your work?

‍Angela - I’ve had one rug of mine for about three years. It’s doing just fine, and it’s tufted with acrylic, which is shitty material. I have other wool pieces that have sat beautifully and are doing great in their homes—probably because they got it scotchgarded to protect stains. One of my good friends, Theo, had his dog peeing in the same area of my rug I made him for months without him knowing, I’ll keep you posted on its stain when he gets it cleaned.

There is no new age tufter who has been around long enough to see how the quality of their rugs has developed. It doesn’t seem like many new age tufters care. It’s a very saturated and quick money making market. It matters to me how these rugs develop and age. I have constantly and consistently changed my practice to confront the critiques that rug manufacturers have about tufted rugs. It is said that tufted rugs are cheaply made, their threads fall apart, they are not as durable, and a pain to finish and bind. In response, I source meaningful material, tuft tighter, and compensate my finishers to the best of my ability. There’s still a lot to learn and improve on, which I assume will happen once I make my next mistake.