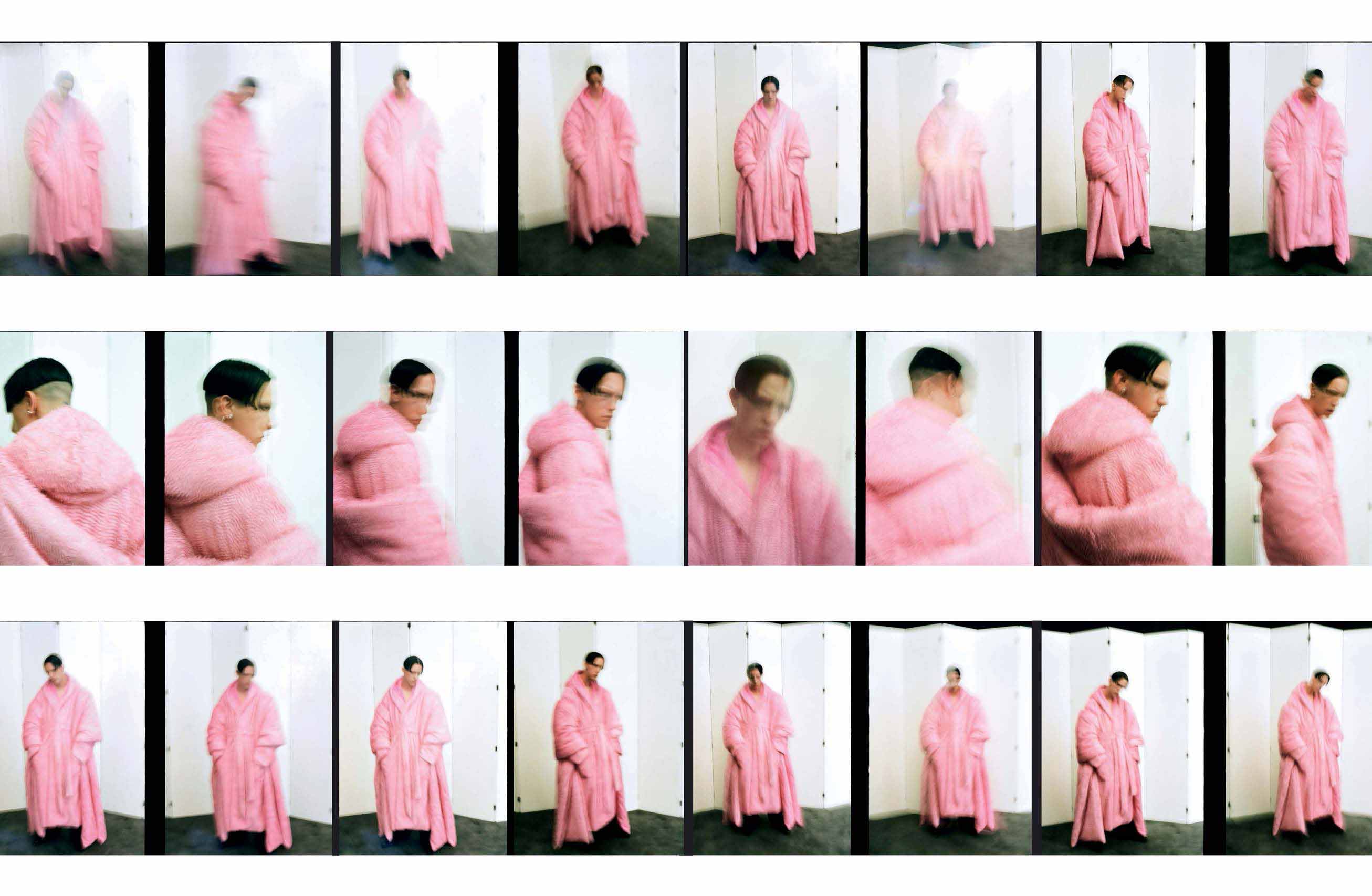 Balenciaga has just taken over the top position as the world’s hottest ranking brand. Demna, its celebrated creative director, speaks to Pamela Golbin about his first Haute Couture collection for the iconic fashion house, Cristobal the man, and Mark Borthwick’s striking portfolio of images.

Pamela Golbin - When I discovered Mark Borthwick’s photographs of your first Couture collection for the house of Balenciaga, I couldn’t help but think of the stark black and white copy- right photos that Cristobal had taken of his designs. In contrast, Mark’s images are not only deeply emotive but also expose and reveal the spiritual soul of the garments.

Demna - When I saw the pictures weeks after he took them, I was struck by Mark’s magic. He brings so much emotion into a still image. There are so few artists who can capture it the way he does. Couture was a very emotional project for me and Mark’s pictures were really a bonus, a cherry on the top. He had taken these for fun and as often happens whenever you have fun, it’s the best outcome. With Mark, it’s the same. I was really enchanted to see this series.

It was the opposite of what I was trying to do with the collection which was all about clothes. I was really putting dressmaking on a pedestal in a way. This is my definition of beauty and elegance. This is my connection to Cristobal Balenciaga’s heritage. I found Mark’s images to be really beautiful because it was no longer about couture. It was no longer about those pieces. It was just about a visual that actually captivates you.

PG: What is the importance of emotion in fashion today?

PG: It was one of those magical moments.

D: Yeah, I think so. I think emotion is part of that magic.

PG: It’s always been important for you to make the distinction between clothes and fashion, so much so that you named your own brand Vêtements, the French word for clothes. How do you define the difference between them?

D: Well, I mean, it’s two very different things. I don’t really care about fashion. But I love and I care so much about clothes and how they can transform you, how they can give you confidence, how they can really have a psychological impact on your being, which fashion cannot do. Fashion is about trends and belonging to a certain circle of ‘I’ve got this, I’ve got that’. It’s identification.

I’m interested in clothing that changes your mindset, which happened to me during the corona lockdown. Personally, the first weeks I was being a couch potato, wearing pyjamas, and not really caring about my appearance at all because I was at home alone with my husband. I started to get really depressive. I was like, ‘Oh, God, what’s the point of it? I wake up, I have my breakfast, I stay in the same space.’ I quickly realized I needed to dress up. That was my therapy. I was like, ‘Lockdown or not, I’m going to make myself looks for the entire week’. I was doing this personal fashion show. I started to wear high heels, quite eccentric looks sometimes that I would never wear out but I felt really happy. Being at home in this terrible period, clothes had a powerful impact on me, on my psyche. They really helped me to stay sane and also made me realize how much I love clothes.

PG: Could you say that clothes are fashion, but without an agenda?

D: Yeah, of course. I mean, fashion has so many agendas maybe this is the reason why the whole fashion concept is really annoying. Clothes don’t need fashion.

PG: Now that you have reintroduced couture after 53 years, the fashion brand of Balenciaga is once again a fashion house and Cristobal is now part of the narrative. DG: Yeah. Obviously, at Balenciaga, I’m aware of the fact that I’m in a house that carries the name of someone else, and that carries an amazing century old heritage. Subconsciously, I actually went to Balenciaga knowing that one day I would probably do couture. Suddenly it made a lot of sense, as you said, Balenciaga almost legitimately became again the house that it used to be. Somehow deep inside of me, I always wanted to do it, but I didn’t dare to until quite recently. I’m not trying to be Cristobal in 2021 or to channel him in any way. It is my Demna story at Balenciaga. I see my vision for the house as a pyramid. There are the sneakers, T-shirts, and merchandising, and then there are the conceptual garments. Couture is a completely different dimension, and it’s really at top of the pyramid infusing the rest of my vision for Balenciaga.

PG: How has the process of your first Couture collection changed you?

D: For the first time since I started working in Fashion, I felt liberated. I felt at peace with the whole industry as well, because at that moment, I realized I didn’t have to fight anymore. Well, of course I do but the difference being that I don’t need to prove anything to myself anymore. Couture, for me, has been a tool to manifest who I am as a designer, not the ‘hoodie guy who does street wear’, but somebody who really understands and elaborates the craftsmanship behind dressmaking.

PG: Do you consider yourself a dressmaker or designer?

D: I’ve always considered myself as a dressmaker more than a designer, which I find a very diminutive way to call this job. Couture saved my excitement and my hunger for this profession and suddenly opened a new door for me as a creative. I’m also inspired to grow and to learn. The moment when I’ll feel like, ‘Okay, I’ve done my best now’, that’s exactly when I shouldn’t do it anymore. Couture made me realize how much is out there that I don’t know. That triggers all this excitement in me that will bring a lot of, I hope, good new ideas out there.

PG: Karl Lagerfeld once described couture as orthopedics for the imperfect body.

D: Exactly. It’s almost like you’re a plastic surgeon, but you don’t have to cut bodies, you cut fabric instead. You alter the posture and the silhouette through the fabric that is on the body. Usually, facelifts make everybody look the same. But with couture, it’s the opposite. It’s like you adapt to that person and make that person be unique.

PG: In the collection, I was surprised that you chose to include Cristobal’s 1968 wedding dress.

D: I was surprised, too! I suffered a lot because it was the most technically complicated garment for me. This was the exact garment through which I learned to let go. We had the original dress from the archives that we looked at and studied it to make it better, more modern, more minimal. For two months, I tried desperately to change it. I put myself through such a struggle and dared enough to assume that I could do it better. Finally at one point, I understood that my strength as a designer in this process, was to let it go. It gave me in- credible freedom. I came to terms with the idea that Cristobal Balenciaga did it the best way, even if it was half a century ago. Ending with this iconic wedding dress was very much a hundred percent tribute to the master class that Cristobal left the fashion history. This dress was a manifestation of Balenciaga’s genius and my thank you, way, to Cristobal.

PG: Balenciaga was able to achieve his goal to reduce the garment to its purest form in the grand tradition of his mentor Madeleine Vionnet.

D: That’s the most difficult thing you can do and that is why I was very happy to let go.

PG: How do you distinguish your creative process between ready-to-wear and couture?

D: It’s fundamentally different because in ready-to- wear, my approach is very product-oriented. I just decide this season, ‘Do I want to make another trench coat?’. If, yes, ‘What would that trench coat be?’. Even though I don’t have a collection plan, I’m a very product-oriented ready-to-wear designer. When it comes to couture, I don’t think of product at all. I just think about the body first. I think about what I can do with the garment so it can transform the body, and give it the attitude, the allure, and the silhouette that redefines beauty and elegance in today’s world. It’s a very different starting point. There is also, of course, the timing. I do only one couture collection a year, in the summer which allows me al- most 11 months to work on the collection. Eleven months means 10 fitting sessions on each garment which is huge because usually, I have three, maximum, four fittings in ready-to-wear. It’s really sheer luxury.

PG: With the launch of Couture, you refurbished the original Parisian salons at 10, avenue George V.

D: Exactly. I realized couture gave me the argument to go back to the historical address of the house. With the renovation, I wanted the space to look like the doors had been sealed for 50 years and that we simply re-opened them. There was a symbolic and poetic concept to it that I wanted to maintain. A couple of days before the presentation, I was alone in the salons, looked out the same window which Cristobal knew so well and had to cry. I believe in the energy in places and realized how scared I had been of being rejected by this place. And I felt so good standing there. I finally felt accepted. For me, the actual show was less scary and less anxious because I was so sure about what I was doing. The idea of bringing the house of Balenciaga back to George V, emotionally, it was very, very important for me.

PG: Couture is always the rite of passage for designers. Now that you are part of the exclusive group of Couturiers, how do you feel?

D: I always felt like I was in the exclusive group of weirdos, like somebody who didn’t fit in, who is not part of the system or is not part of the big game. But with couture, strangely, I feel at home just like I feel at home at Balenciaga. It’s a place where I belong. Since I was five years old, the only thing I asked my grandma to buy me was a measuring tape and scissors. I am still that five year old when I do couture, but on a big scale. I feel like, ‘Thank God, I can do this’. I’m blessed to be able to do what I was probably born to do.

PG: What’s the next challenge?

D: I don’t want Balenciaga to be a brand that does couture to sell perfume, bags or sneakers. Not at all. I want to create a very modern type of conversation with my audience. How big do you have to grow? Where is the limit of business and ambition? To me, Balenciaga represents dignity. My biggest challenge for the next chapters is to have this house evolve within this very elegant and dignified manner that was the way of Cristobal.