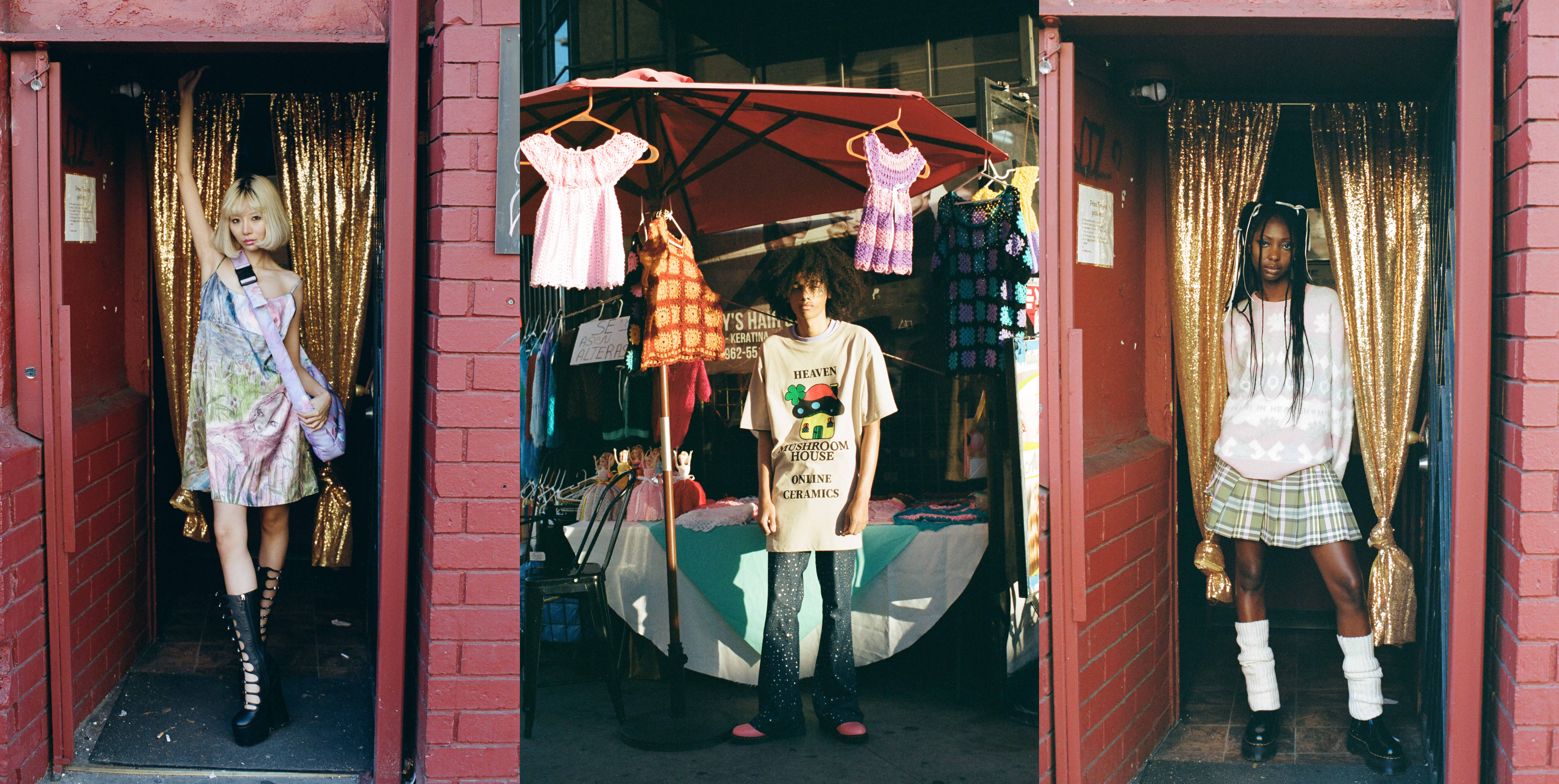 In this exclusive editorial, producer Byron Jesus Rodriguez and photographer Sean Maung link up to showcase the next generation of LA talents through the highlights of Heaven by Marc Jacobs Autumn/Winter 2022 collection‍‍

Born in Boston, Massachusetts, Byron Jesus Rodriguez is something of an all-around creative. Now based in Los Angeles, where he relocated in 2017 to pursue his career ambitions, the young artist, actor, casting director, producer, designer and stylist is constantly redefining the boundaries of his craft, jumping from the set of a photo shoot to that of a film within a matter of days.

Having styled and cast for a variety of editorials besides producing campaigns with brands of the likes of Burberry, Calvin Klein, Anonymous Content, Kenneth Nicholson, and more, he looks at his multidisciplinary practice as a way of “trying new things and learning from my failures until I finally reach my goals”, Rodriguez tells Re-Edition. More than anything, he aims to “create the possibilities for a better tomorrow and inspire others to do the same”.

To celebrate the launch of his latest editorial – which is developed in partnership with the pastel-shaded, 90s-meets-Y2K universe of Heaven by Marc Jacobs, and lensed by Sean Maung – the creative multitasker talks us through the making of his LA-youth-inspired story and what this means for a new generation of artists.

RE: When did you first come in contact with Heaven by Marc Jacobs and what fascinated you about it?

‍BJR: I discovered Heaven by Marc Jacobs in 2020 and have loved it ever since. The ways in which the line is wearable art make it a revolutionary brand – think of the puffer coat featuring an Ed Templeton photograph on its back, or of the nostalgic vibe that is channeled in the Virgin Suicides silk skirt. It feels like clothing that could only age better with time. I have always admired Marc Jacobs, so I couldn’t be happier to see an extension of that world.

‍RE: How did you go about selecting the talents featured in this editorial? How does each of them exemplify the vision at the core of Heaven by Marc Jacobs?

‍BJR: With this project, I felt the urge to highlight some immensely creative people that have this ‘awe’ to them. I wanted to showcase a diverse group of young talents active across music, clothing and visual art. Each one of the sitters lensed in this editorial is a multifaceted artist, so creating this story together was very exciting.

For me, Heaven by Marc Jacobs equals inspiring the youth and the next generations. The people captured in this series provide me with the drive necessary to continue creating, and that is what makes this project so special.

RE: Imagine you were asked to describe Heaven by Marc Jacobs in one sentence, what would you say?

‍BJR: It feels nostalgic while also tapping into the present and the future.

‍RE: What made you want to have Sean Maung on board for this project? How does his photographic style further enhance the authenticity of Heaven by Marc Jacobs?

‍ loved the Heaven by Marc Jacobs 2020 lookbook, which was lensed in Tokyo by street-style documentary photographer Shoichi Aoki. His decades-long exploration of Japanese life and pop culture has had a great influence on the development of my own taste. It really captivated me while growing up: I remember looking at FRUiTS magazine for the first time and being in awe about every ordinary person’s individual style and how he had managed to immortalise it with his camera.

Besides being an incredible documentary image-maker himself, Sean Maung is also one of my favourite photographers. I first came across his work in 2018, when he was featured in Coming of Age, an exhibition launched in collaboration with Virgil Abloh at Little Big Man Gallery, Los Angeles. On that occasion, they released a zine with photographs from a number of talented photographers, including Ed Templeton and Sandy Kim. Sean’s images were some of my favourites from the show. When this project came about, he was the first photographer that popped into my mind: I knew he would have captured Los Angeles like no one else.

RE: How about the styling? What was your concept for this shoot and what influence did the editorial's location have on your final picks?

‍BJR: It was so much fun shooting with Sean because he knows Los Angeles and Hollywood very well. We wanted to visually render the gritty, raw feel of the streets of LA. So, we went out as a group, walked around some restaurants and outside some local shops and kept it very community-based. The location style was freeing creatively.

For this shoot, I really wanted to focus on the hair and makeup just as much as on the clothing, preserving the vision behind Heaven by Marc Jacobs while also gathering influences from the amazing artists that appear in the editorial. Darine S. did all the hairstyles while Esther Foster worked on every makeup look. Presley wore the brushed chunky star sweater as a dress with the black Kiki boots and Darine created the sparkly jeweled stars in her hair while Esther made her eyes glittery pink, adding to her ensemble.

‍RE: How does the shoot speak of the generation portrayed in it?

‍BJR: The goal behind this shoot was to celebrate some of the creatives that are part of the Los Angeles community and encourage the next generations to be leaders and creators of the future. The story is all about shedding light onto their hard work and dedication to the arts while keeping on creating collaboratively.

‍Discover the full story below. All clothing is taken from the Heaven by Marc Jacobs Autumn/Winter 2022 Collection.