when Harry Freegard enters a room, you can’t help but notice him. 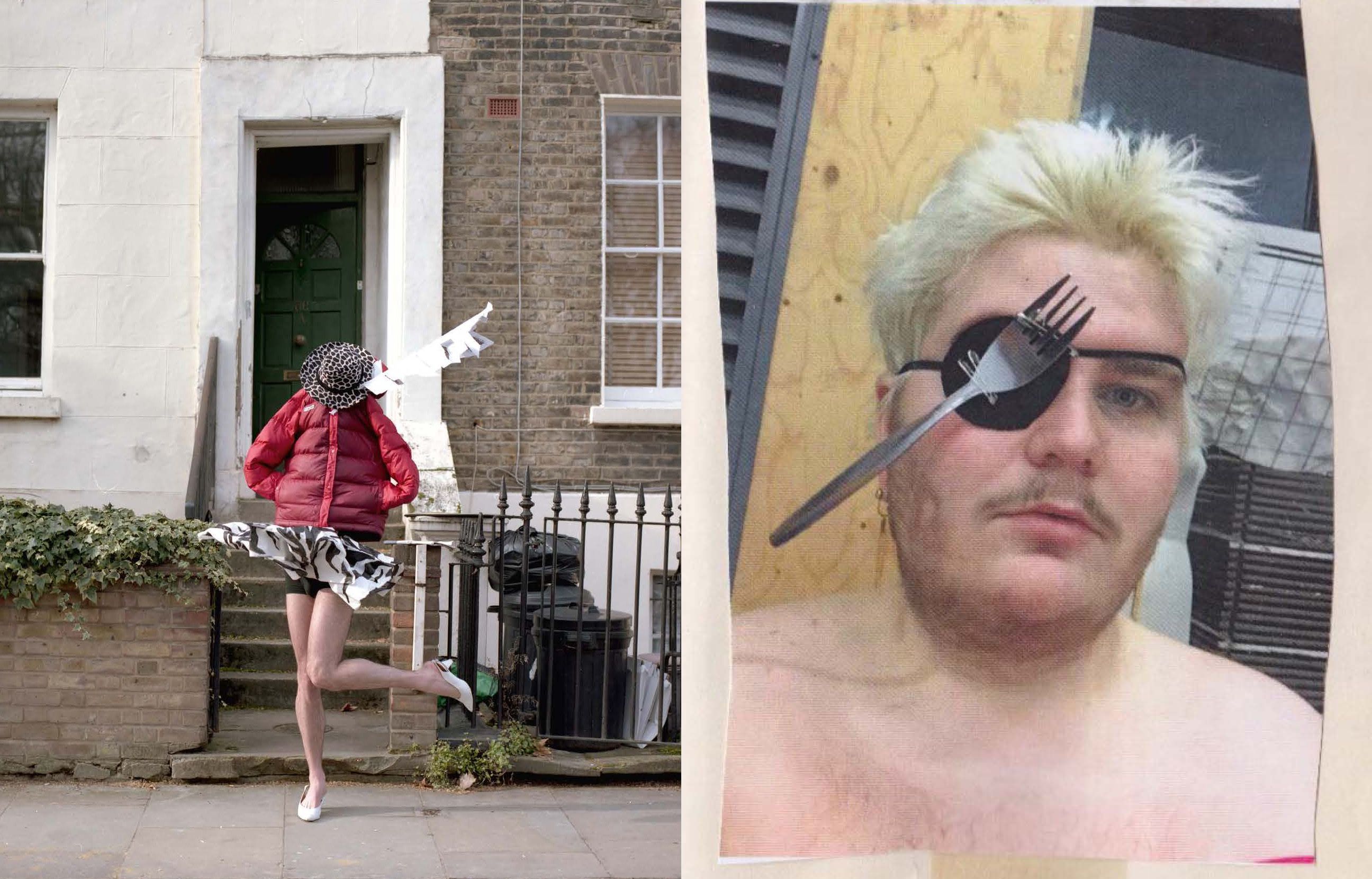 It’s absolutely a cliché – especially in the context of fashion – but, when Harry Freegard enters a room, you can’t help but notice him. Usually spotted swanning around central London with friend, partner-in-crime, and fellow fabulous Central Saint Martins graduate, Gui Rosa, Harry is typically wearing nothing more than a spaghetti-strap sequin gown, kitten heels, and tiny handbag whatever the weather – though, sub-zero temperatures require tights (usually fishnet).
“I love fashion and love being a spectacle. I always dressed up and did weird shit as a kid and it just never stopped,” he says delicately sipping on a soy latte, sprawled on a sofa in coffee shop by London’s Southbank. As above, Harry is wearing a strapless sequin dress, made (slightly) more weather-appropriate with a vintage lumberjack-esque plaid shirt. “I’m really into glamour interrupted with everyday tat; I’m really into this rip,” he explains, lifting the shirt to show a gash on one side that he’s repurposed as a pocket (there’s a satsuma and some scrunched up bits of paper inside). “Chipped nails too,” he adds, brandishing stubby fingers with silver-painted nails that are indeed chipped.

Today, Harry is wearing clashing eyeshadows on each lid, one eye dusty lilac and the other lime green, and gold lipstick that looks like it’s been applied in the dark, messily outlining his lips. Harry’s current beauty look is inspired by the 80s. “Those guidebooks that tell you how to be beautiful,” he explains. “I’m doing that at the moment.” Constantly reinventing himself, just like when he was a child, previous iterations of Harry’s varied beauty statements have included ‘rave glam’ (exclusively wearing clashing neon green and orange colour combos) and ‘goth glam’ (wearing so much £4 Superdrug blue highlighter to try and look dead). “I’m obsessed with Larry B and his make-up always looks so matte and dry,” he says on his next look, ‘dry glam’. “I just want to look dry all the time too.”

For the Wiltshire-born creative, despite not coming from somewhere not typically associated with fashion – “there’s a really famous roundabout called The Magic Roundabout in Swindon and that’s about it,” Harry says rolling his eyes – it’s been a career he’s been interested in pursuing from a young age. “It’s so cliché, but I was always dressing up my Barbies as a little kid,” he remembers. As for his – for lack of a better word – outlandish style, he thanks his mother Kristina. “She used to tell me stories about painting myself silver and she’d ask, ‘why did you do that?’, but there literally wasn’t a reason. It was just cool to me.”

He’s got looks, he’s got style, what does Harry actually do? Primarily, he’s a designer, but to just call him that would be far too limiting. “Jack of all trades,” he says wryly, very much a part of the ‘slash generation’ as a designer-slash-stylist-slash-model-slash-DJ-slash-writer. Or as his Instagram account – @harriebradshaw, which is an homage to Sex and City’s Carrie Bradshaw and not his actual name – succinctly puts it: “It girl and horrible boy”. If he’s not shooting for magazines, he’s walking in fellow designers’ shows, or just being a girl about town, so, he doesn’t have much time for design, only now releasing his second collection off-schedule, eight months after his debut. “It’s so strange because when I was at CSM I would always say: ‘I’m going to be a fucking huge fashion designer and that’s it’.”

Harry’s new collection picks up where he left off with his graduate collection, continuing to create clothing that is all at once campy, OTT, and, for the most part, unwearable. Held together with safety pins and a prayer, models sashayed (and in one case skipped) down the runway to the Pet Shop Boys’ Absolutely Fabulous deafeningly blasted from the speakers. Harry appeared too, racing down the catwalk on a gold-painted scooter dragging along a skeleton effigy of himself, wearing a newspaper headpiece that exclaimed ‘HARRY IS DEAD!’. Funeral paraphernalia like memorabilia plates (with Freegard’s face on it, hair blown out and tiara like Princess Diana) and an urn filled with biscuits that the model carrying casually threw into the audience also featured.

As for the clothes themselves, Harry’s approach to design is at the intersection of a pragmatic ‘make do and mend’ attitude and an insatiable hunger for glamour. In fact, he managed to blag his way into CSM’s prestigious BA show by turning up to his crit with a few piece of paper stapled to a Wellington boot he claimed was an opera glove. Elsewhere at the show, looks created out of shredded paper looked like Chanel’s signature tweed jackets, and tops made out of old sports socks that had been stitched together.

Despite making each of the pieces by hand – often out of paper and other found objects (“If it’s on a body I’m down,” he says) – sustainable isn’t a title he’d claim. Instead, the message is one dismantling the elitist tropes of fashion – anybody can make anything they want out of whatever they want. “I’m not trying make money from selling clothes, I’m not trying to show at fashion week, I’m at a level where I just love making things,” he adds.

“Now, I’m looking more at shape and playing more. I must say I’ve not really flexed that much but there is still a lot of lols,” Harry explains about his new collection. “I’m just really concentrating on gorgeousness at the moment.” Said gorgeousness manifests in the form of a sequin minidress (accessorised with a toaster, clutched like a purse) and a puffball of acid green tulle as a figure-enveloping dress. Paper looks appear again, in the form of hand-painted, animal-print dresses. The scene-stealer is a white gown with a train that is easily 20 feet long; it looks straight out of Dior’s couture archive from afar. When suggesting that people would be interested in buying his clothes, he adds: “It’s literally made out of paper… it’s unwearable.” Something for exhibitions or Gaga's of the world only then.

A million miles from the terrible fashion cliché of being all style and no substance, Harry is a font fashion knowledge with a love of glamour of all kinds, both high and low. He peppers our conversation with references from Project Catwalk (“I live for the original with Kelly Osbourne, black bob, covered in tattoos”), to Chanel’s fake beach-set SS19 collection (“It was fantastic, and was obviously designed by somebody who loves the house of Chanel.”)

“I’m obsessed with fashion, but I also hate it” he muses. “I hate what I do, that’s why I do it non-stop.” He’s mostly joking, of course, but one thing Harry actually hates is what he refers to as “screenshot people” – those who do all of their research from Instagram, or worse, Pinterest. “I’m just not that person,” he sighs. “I like to open an actual book and pick out things I like, or go out into the real world and find tiny, nothing things that are interesting.” ‘British-isms’ are a common-running theme throughout his work. “Gin and tonic-flavoured crisps or champagne-flavoured crisps from M&S,” he jokes. “That’s my mood right now.”

If you forget about the fashions for a moment though, above all, it’s Harry’s wicked sense of humour that really draws you in. Constantly making ironic quips – or “shit sound bites” as he retorts – any ordinary (read: cynical) listener would likely dismiss him as a vapid fashion bitch; not that he would mind that. “I feel like my humour never comes across when written,” he sighs. It’s easy to see why, dropping bombshells with a glimmer in his eye, all to catch you off guard. “I’m anti-queer, kill all gays,” he says on the blanket use of the word ‘queer’, or “That’s why I voted Leave,” on Brexit, for no reason whatsoever. Waiting just a second for the beat, before throwing his head back and erupting with a raucous laugh, you can almost imagine him winking after every risqué comment made, though he doesn’t.

While it’s perfect for gossiping over a coffee – or an Aperol Spritz outside a gorgeous spot in Soho as he’d prefer – Harry’s humour isn’t necessarily to the taste of the rest of the industry. “I think I piss off too many brands, I need to be more commercial,” he says, recounting a number of projects deemed too outré for the luxury brands who hired him. “I should just dye my hair brown, get a pair of black jeans, and a skinny tie.” Naturally, Harry doesn’t actually own a pair of jeans.

It might not be en vogue, but Harry’s devil-may-care attitude is exactly what fashion needs right now. With constraints from advertising brands and the overwhelming feeling that there’s a desperate need for everything to be polished and perfect, Harry’s honest, messy-but-fabulous approach is much-needed relief from that. “Fashion is a highly constructed fantasy,” he muses. “People are so afraid of pissing someone off or losing money, but it’s funny to be horrified. Maybe we need more of that.”

After only making his graduate debut last year, Harry has quickly become fashion’s enfant terrible, shooting for the likes of Replica, Man About Town, and Candy; the latter of which he appeared on the cover with Tilda Swinton in matching paper gowns emblazoned with ‘A GORGEOUS DRESS BY HARRY FREEGARD’ for her and ‘AN EVEN MORE GORGEOUS DRESS BY HARRY FREEGARD’ for him. He says the art world has taken notice too: “This guy from Christie’s came into my studio asking to buy some stuff and literally left with a piece of blue tack that I shaped to look like Jesus.” Even Naomi Campbell counts him as a fan, sort of. “She posted a picture of me on her Instagram carrying a cutout at the Rottingdean Bazaar show… she didn’t tag me though,” he jibes but casually plugging. “She’s my favourite women alive though, I’d love to shoot Naomi, I really need a supermodel moment.”
Perhaps the future fashion and the world at large deserves, is one where Harry Freegard is a household name. The former at least could do with encouraging more riotous, charismatic creatives who say the wrong thing to bring their voice to the industry. And the latter? “I got offered to do something for Netflix and for BBC, but I said no because I didn’t want it to be a bad version of Queer Eye,” he shares, also explaining how he turned down Big Brother. “It’s hard because I don’t want to be a wreck on TV, I just want to be in a story about being a fashion professional who just happens to be funny.” He adds a completely shameless plug: “I would do American Netflix though.”

So, what next then? Whatever he wants. As he sees it, the world is his oyster: “I’ve always been this fucking freak in dresses and it really does open up doors.”