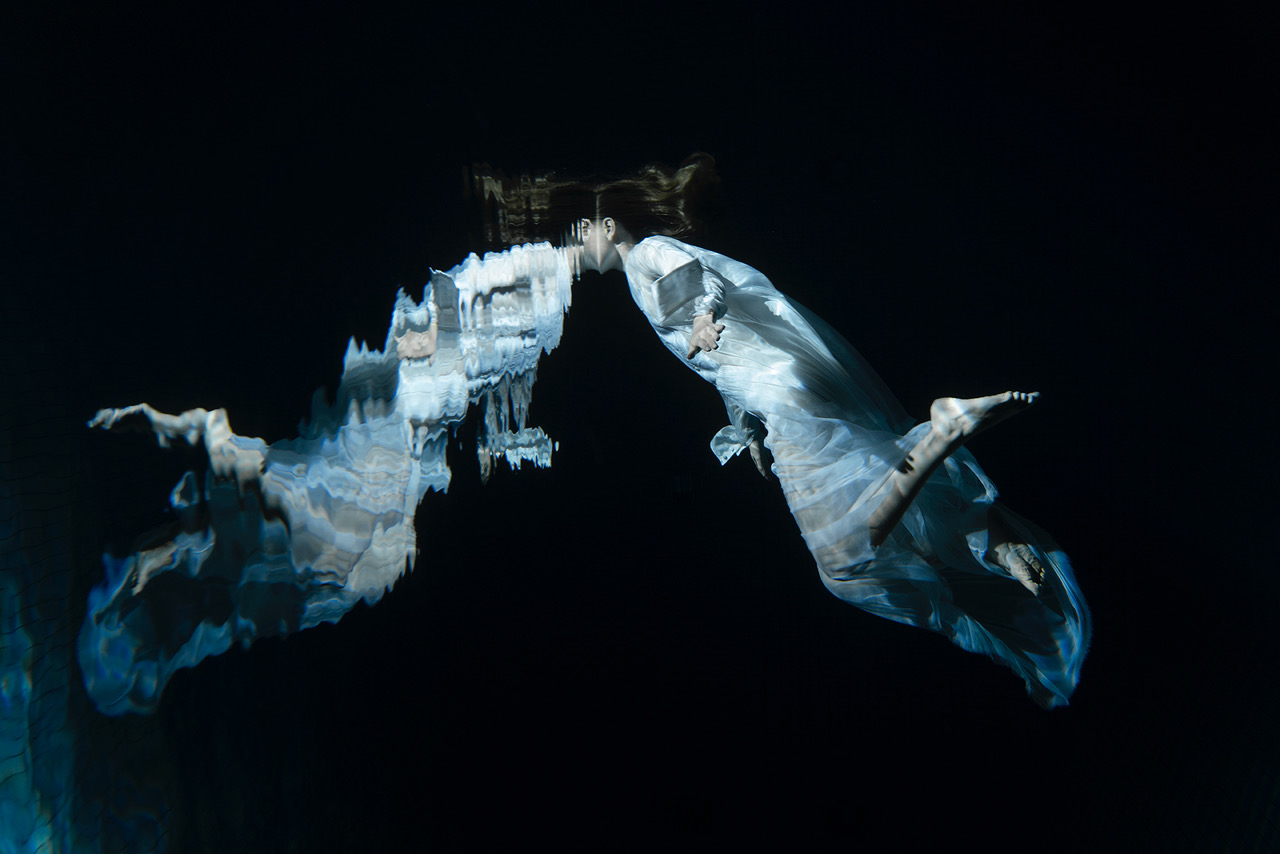 The film is a poetic visual analogy that merges the androgynous philosophical design ideas that lies behind Jens Laugesen’s hybrid design language together with the avant-garde mirror -reflective vision of art photographer Henriette Sabroe Ebbesen. Where Henriette Sabroe Ebbesen uses mirrors in her photographic universe as an interface between reality and fantasy, Jens Laugesen's design universe is known for exploring dialectics between clothing, body and gender where generic clothing are deconstructed to be reconstructed into new forms and semantics. The film depicts a woman and a man as distorted mirrored images of each other's opposite in a surrealistic dreamlike universe that fuses the subconscious of the androgynous characters, both

searching for their own inner / outer mirror image. The bespoke futuristic classic sound is made by Hellas duo by Peter Sabroe and Jeppe Høj Justesen, who will also perform a live concert during the opening reception.

Jens, when did you first discover that you wanted to be a designer?

I’ve always been interested in drawing, science and photography, and read books by Karen Blixen and Kirkegaard when I was around 13. My initial plan was to study microbiology and to specialise in the ethics of genetics and cloning but when I took a half year sabbatical in France I realised it would be too theoretical. Since I’d always had an interest in craft and garment making I saw fashion and clothing design as a platform where I could combine science and creativity. When I was 18 I moved to Paris and ended up assisting Gunnar Larsen, a Danish Fashion Photographer, I became his PA and main stylist collaborator assisting fashion shows and calling fashion houses to borrow garments for the photoshoots. The contrast was amazing, coming from a farm in Jutland to the heart of Paris Fashion circles and the couture houses. Gunnar was my first mentor and he taught me to find your own style and stick to it and that you can make amazing things happen with a very little team and hardly any funding
‍

‍
How do you think being  Danish has shaped your life, mentality and creative process?

Being Danish I have always been surrounded by design and functionality. I was born and raised on a farm but my parents had both Bang & Olufsen stereo and TV and my school had Arne Jacobsen lamps and chairs. When I was at school we also had manual craft classes in the 70’ies where we would also learn sewing. At one point I even made my own outfit for my High School graduation – so the idea becoming a clothing designer was kind of a natural evolution.

You began your career in Paris and then moved to London. How did working in these two design capitals influence your work?

My professional career has always oscillated between London and Paris. I worked with Gunnar for 2 years and was accepted directly onto second year at the Ecole de la Chambre Syndicale de la Couture. I studied under with Mr Marco, a modeliste or pattern cutter who had worked for Cristobal Balenciaga and Pierre Balmain. He taught me the artisanal craftsmanship of Haute Couture draping and how to construct 3D volume and functional garments. By the time I was 29 I was head of collections at a huge German luxury brand, but I was bored of the ‘old world’ brand ethos and copy-cat creative processes. I had already undertaken an Master Desgree in Fashion Management from Institut Francais de la mode but wanted to explore my creativity further so I did an MA at Central Saint Martins with Louise Wilson. Studying under her was particularly hard as I had to unlearn what I already knew to reconstruct a new identity; she helped me personally through very tough and critical mentorship and I exceeded my own creative and professional standards when I launched my brand at London Fashion Week, which I was a part of for 6 years. I was also the first London-based young designer to be scounted by Rei Kawabuko for Doverstreet Market. A also won the ANDAM Award with financial support from LVMH which allowed me to showcase my collection with an individual exhibition at the Muse de la Mode in Paris at the Louvre.

How would you describe your own style, and how did you discover it?

When I was at St Martins I researched ideas around fashion and deconstruction; finding my inspiration not only in the legacy of Rei Kawabuko and Martin Margiela, but also in architecture. I became fascinated with ideas of hybridisation especially the Dutch architects Ben van Berkel and Caroline Boos who founded UNStudio. My pivotal turning point was when I almost left the course, and out of desperation started to work on a Yves Saint Laurent smoking jacket I found in a Paris flea market, finally I started to get positive feed back from tutors, they felt I had rediscovered my talent for tailoring craftmanship. When 9/11 happened during my second year it really impacted me, I saw this catastrophe as the end of 20th century modernism as we know it and the beginning of the paradigm shift to the 21st century. That was when I started to define my personal design philosophy, something I named Hybrid Reconstruction; combining fragments of different garments or designs into something new. This is still the core of both my design practise and also what I use to influence new generations of designers when I teach

Your branding is very stylised, how did that come about?

In the early 00’ies my designs were labelled with seasonal labels, like the ones you'd sew into children’s school uniforms. But after the Ground Zero trilogy I felt it would be important for me to define a specific identity for my brand. I really was inspired by my new website being coded, the vertical and horizontal lines of coding symbols like the double slash  (//) and underscore (_). I visually transformed the brand to be more conceptual with the utilitarian aesthetic and methodology. This kind of post digital glitch process allows me to explore new silhouettes and aesthetics; //JENS_LAUGESEN, is focused more on the actual code of the design, as opposed to just the identity of the designer.

‍You use film a lot in your design process, how did you become interested in moving image?

My films reflect my design technique, splitting the screen, cutting, splicing, it allows my imagination to flow freely. I almost see it as punk, generated images, glitches; taking things which inspire me and making them into new hybrid and morphed shapes. The A/W 18 Eden film was inspired by Faith in Chaos, a film I made in collaboration with Nick Night for SHOWstudio in 2003 for my third collection, I feel it kind of predicted the fragmented design thinking of today.

Can you tell us more about your most recent film, Persona Double?‍

Persona Double is part of the second instalment of the recent Hyrecon trilogy that was made possible thanks to a grant from the Danish Art Foundation. Thurstan Redding directed it with stylist Anders Sølvsten Thomsen, and I created three installations in London, Paris and Copenhagen; it’s been shortlisted at the Diane Pernet ASVOFF fashion film festival to be screened in Paris end of Janurary 2020. The film is set in a post-vhs metamodern landscape, and it featured the model Anja Rubik. In the film collaborations I like to combine scenography with a mixture of light, sound and projections, so I can create these immersive experiences and ambiance.

For my presentation in London I also produced short concept films depicting the turning silhouettes of the collection using the glitch aesthetic which I’ve been developing over the years since my collaboration with Nick Knight. At the time creating glitches was far more analogue and spontaneous, we discovered these pixel winds which happen when you fast-forward a video tape. But now everything is digital these glitches are more meta-modern and they inspire my hybrid design thinking.‍

I’d like to think I’m a multi-disciplinary designer, I operate between design industry, moving image and art. I also now work in education as MA fashion Module leader, mentoring students and consulting for brands. I am currently consulting with Net-a-Porter for the Iris & Ink private label collaboration with Julia Restoin Roitfeld alongside working on a bespoke capsule collection for Daphne Guinness. I’m also collaborating with the Danish heritage knitwear brand S.N.S. Herning on developing a womenswear collection and a signature hybrid sweat/shirt/t-shirt capsule collaboration with a new sustainable and circular brand Walk on Moons, that will launch in a couple of months.‍‍