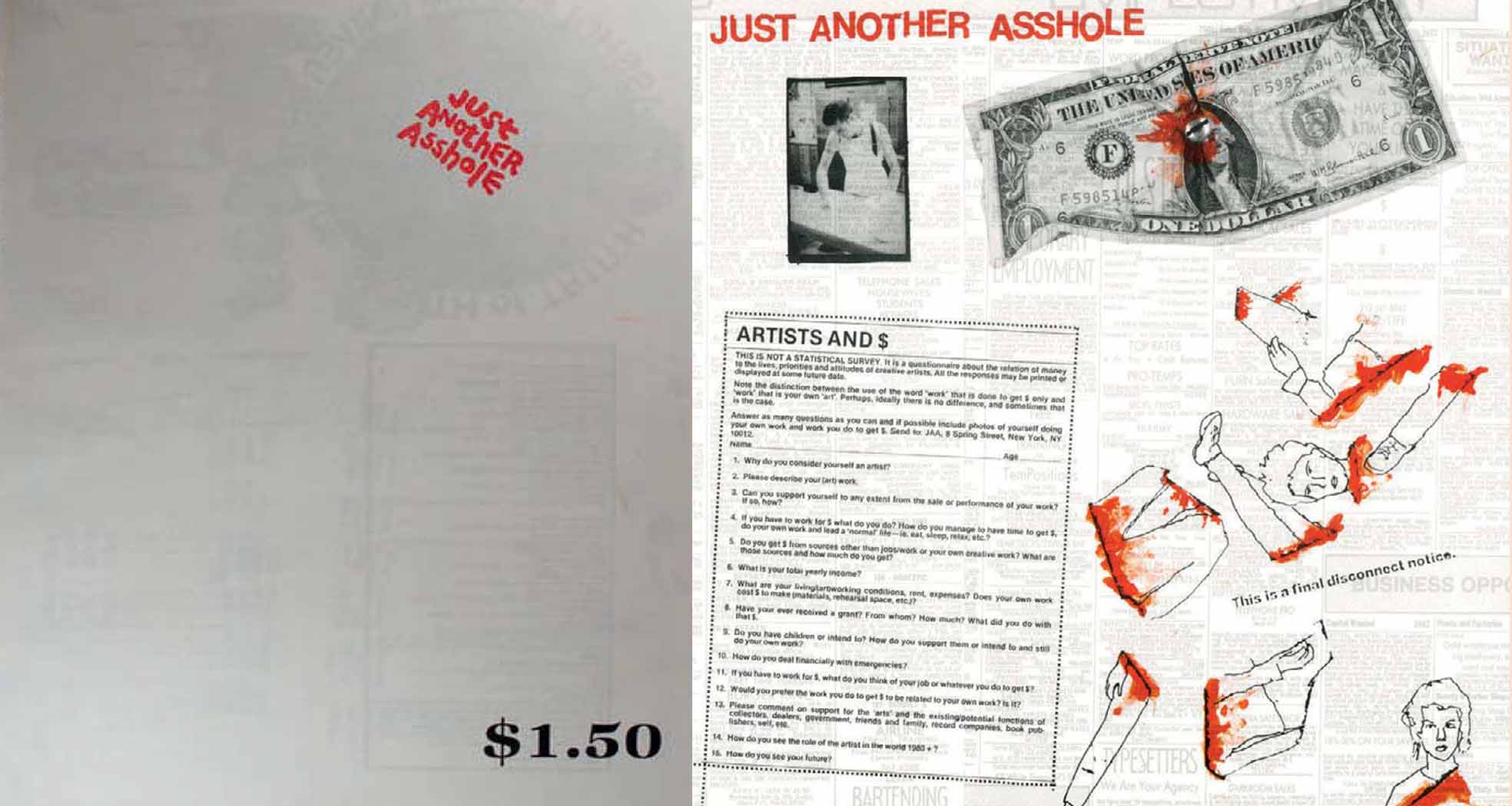 “When I try to get clever I fail, so I stick with the basic issues of human life on earth—sex, death, relation- ships, discovering who you are, being hurt and con- fused.”

If these themes were at the core of multi-me- dia American artist Barbara Ess, it’s no wonder her work stirs dark corners of the human psyche. It’s this exact sublime approach to her art that forces us to look deeper into our sentience — if there’s some- thing brewing just beneath your surface, Ess’s work will make it rise. While she is most commonly known for her innovative, large-scale pinhole photography (a rarity in the art world), for a cast of zine fanatics, it’s Ess’s 1980s DIY zine, Just Another Asshole that stirs the most. It was an intellectual riot and a physical chaos that truly pushed the bounds of what it means to be a magazine.

Ess launched Just Another Asshole in 1978 as a response to the alienating and dehumanising effect of the media, and published seven issues until its end in 1987. It’s innovation was found both in its transgres- sive subject matter, but also in it’s changing format: Just Another Asshole was not only a print magazine, but across it’s nine years of publishing it took form as 77-track vinyl LP, a magazine insert, a zine, a pulp paperback and much more. “It was never content with just being one thing,” recalls friend of Ess and managing editor of publishing not-for-profit, Primary Information, James Hoff. “Formal impatience and ex- ploration were at its core; it both served its community and pushed to expand it. It was intrinsically tied to the no-wave scene, but I always saw it as part of a larger history of artists’ magazines — it is an artwork in ex- panded form.”

Issue one and two of Just Another Asshole took the form of limited edition, xeroxed zines that were taped together with electrical tape. “I think it was produced in an edition of 10”, explains Hoff, “and the cover was written by hand with red lipstick. . . you can’t really beat that.” The launch issues explored how the me- dia exploited events for their shock and entertainment value, through the lens of high contrast compositions

of abrasive apocalyptic warnings and confrontation- al celebrity close ups. Issue three echoed the inclu- sivity of the wider downtown arts scene by publish- ing anything that was submitted, “no matter what, no matter whom”. It was released as a graphic arts zine featuring over 100 artists from Barbara Kruger to Jeff Koons and musician Kim Gordon. Issue four was an insert inside Art Forum that tempered ideas of religion and the relation between art and money, while issue five (an audio magazine) was a record album featuring 77 tracks from over 84 artists.

It’s the zine’s second last issue, number six, which reigns strong with many of the zine’s loyal fanatics today. It unites over 60 short prose pieces from notable figures of the then local scene. Exper- imental writer Kathy Acker submitted a piece called My Death, believed to have later become her 1987 short story “My Life, My Death by Pier Paolo Pas- solini”, while Neo conceptual artist Jenny Holzer submitted a piece called Survival Series — a set of thematic statements just like the ones she’s now become synonymous with.

As a whole, Just Another Asshole is now seen as a time capsule that embalms the punkish rebellion of Lower Manhattan’s now lost but never forgotten underground — a time before the AIDS crisis rat- tled the city, and gentrification pushed the scene out. “Lower Manhattan was gritty and dynamic at the time”, explains Oliva Smith, Ess’s friend and gallerist at Magenta Plains. “Just Another Asshole seems very much to have bridged the cultural gap between the underground music scene and visual art. It was made during a time when there were more musical venues downtown than commercial galleries, so it seems artists found ways to support each other through experimentation and collabora- tion... It must have been a great context for all of the artists together in the “compilation” sense. It was really inclusive and interdisciplinary — it was a manifestation of the freedom that Barbara em- bodied wholly.”