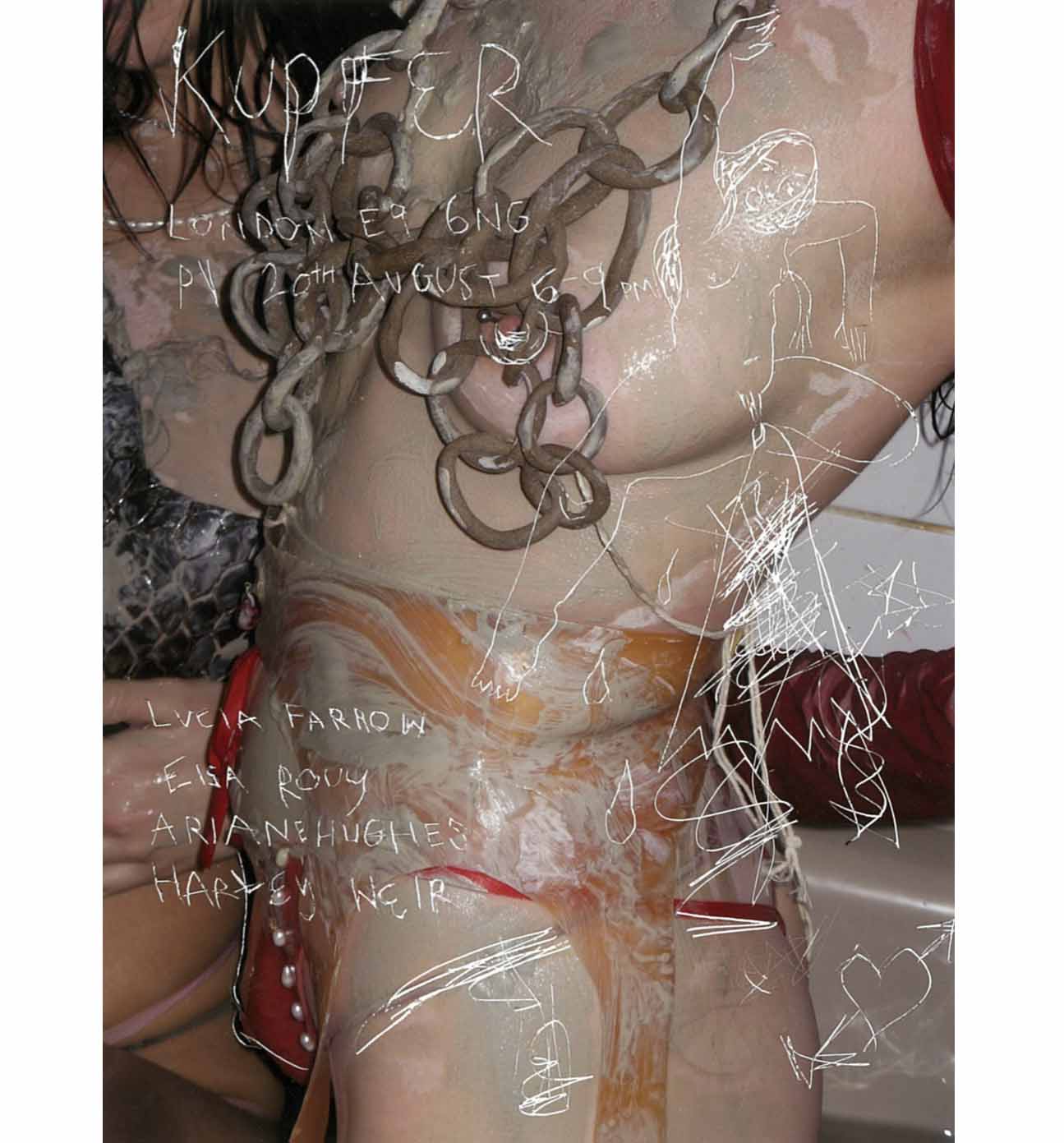 And kneeling at the edge of the transparent sea I shall shape for myself a new heart made of salt and mud (salt and mud, for short), is a duo show between Lucia Farrow and Elsa Rouy, collaborating with Harley Weir and guest artwork by Ariane Hughes. Their bodies and practices are synthesised with a photographic series in which both artists are adorned with their own ceramic and latex pieces.

The show is an exploration of tensions between cleanliness and dirtiness, transgression of bodily boundaries, defiance of presumed female purity, notions of the corporeal, girlhood, and the sexualisation of innocence. It includes not only large scale photographic prints taken by Weir, but also small paintings by Rouy and Hughes, and ceramic tiles by Farrow, all framed by a young, fresh female gaze.

Bodily fluids are seen expelled onto eyes and faces, legs merge together in bathtubs, held together by latex and ceramic pieces, whose pink and red tones take on fleshy, bloody qualities. These bodies meld into something monstrous, unrecognizable. Yet, at other times, specific body parts are clearly visible; wet hair clings to a naked chest, a nipple appears on the verge of being cut off by a ceramic brassiere. In line with Julia Kristeva’s theory of abjection, the images in salt and mud place things where they are not supposed to be, be it limb or liquid, forcing us to confront our own corporeality.

Dirtiness permeates both subject matter and physical form. The show seeks to disrupt traditional notions of the ‘white cube’ gallery space. Boundaries are disrupted in self-referential, cyclical ways. Clay is smeared onto the walls and covered with a layer of pink latex, so that it peeks out and hints at a barely-obscured dirtiness. It is as though these materials ooze out from the photographs into the physical gallery space, unable to be contained, leading to an immersive, inescapable affect. The otherwise smooth surface of the walls is disrupted, dirt and clay bubbling underneath, leaving marks behind on inanimate objects and human bodies alike. All elements strive toward an atmosphere of total discomfort.

In many ways, salt and mud is a perverse, twisted look at coming of age, by two artists who, despite already being of age, retain an undeniable air of girlish innocence. This innocence is immediately, promptly sexualized. Farrow and Rouy did not originally seek out to explore notions of girlhood with their work. The show is rooted in their lived experiences as women, as well as close observation of each other’s work, and common use of natural materials to produce wearable items. The prints, as well as Farrow’s ceramic tiles and Rouy and Ariane Hughes’ small paintings are explicit, sexual, and sensual, yet with a sustained innocence breaking through. Above all, salt and mud strives to explore female eroticism, sensuality, obscenity, violence, and subsequent tensions between both physical and emotional cleanliness and dirtiness; notions of the corporeal, and defiance of womankind’s presumed purity, through a young, fresh, female gaze.