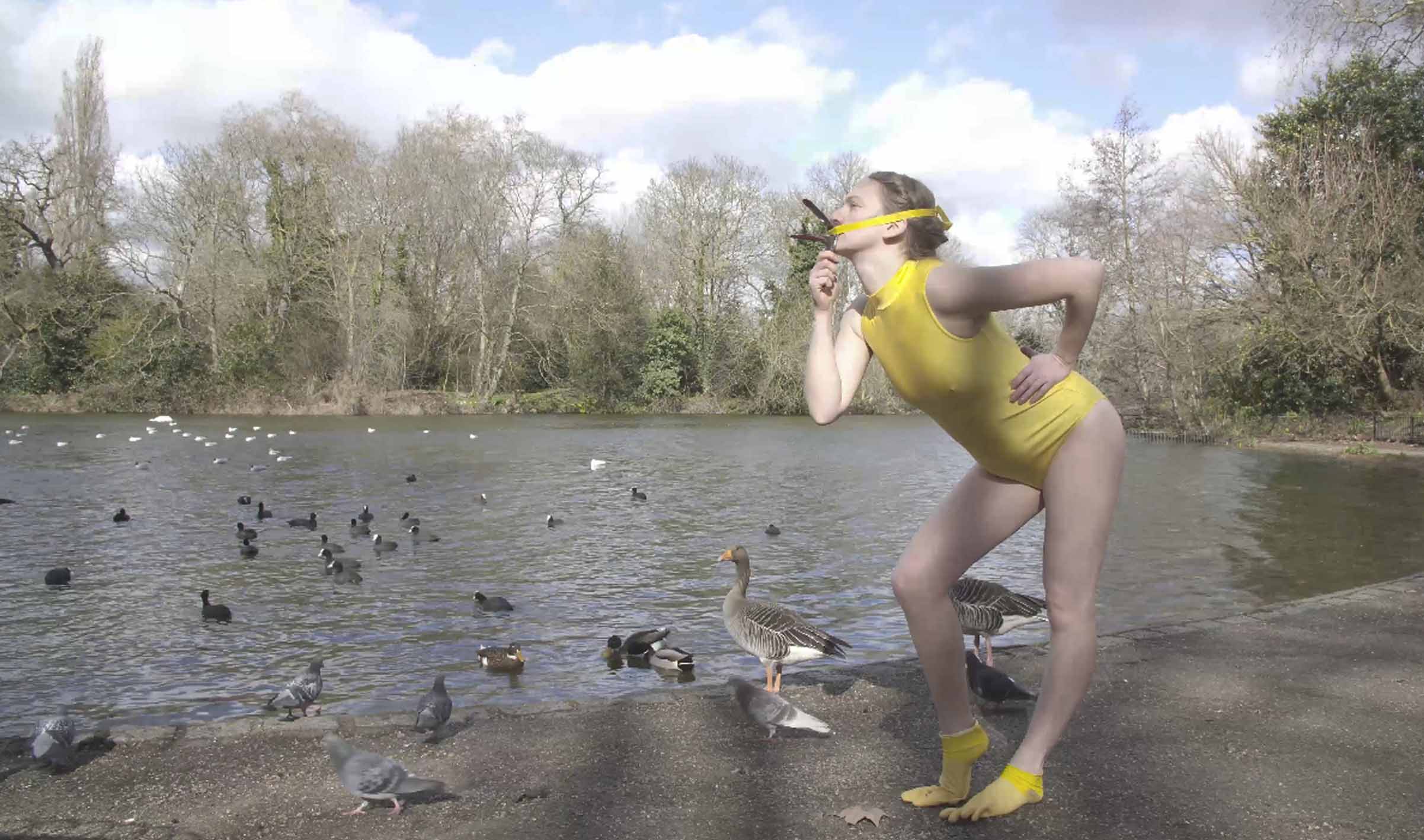 The London-based creative aims to dissect the mechanisms at work in today’s society — from gender performativity and sexual politics to consumerist culture — through her humoristic, thought-provoking approach to art

“The urge to express myself artistically is an inclination I have always had. Ever since I was a kid, I have always loved drawing, making stuff, and being creative,” says Rosie Gibbens, a London-based interdisciplinary artist working across performance, sculpture and visual art. Having cut her teeth studying Performance Design and Practice at Central Saint Martins (2015), Gibbens soon came to understand that the art world was far more appealing to her and less restrictive than a career in design. As she explains to Re-Edition over a Zoom call, it all happened organically whilst she was busy working on the costumes for her Bachelor’s degree. “As time passed, my costumes became more and more possible to activate,” she says. “Whether by turning into a shower or a mop, it got to a stage where I had to become part of the costume itself in order to show how it worked and bring it to life.”

Having subsequently pursued an MA in Contemporary Art Practice and Performance at the Royal College of Art (2018), today Gibbens — one of this year’s artists in residence at Sarabande Foundation — is fully giving in to the power of body-based performance; a medium she explores by “interacting with found objects or fabric sculptures and embracing the spectacle of theatricality”. When I first come across her work during “Identity and Art: A conversation with Sarabande at Shoreditch House”, a panel talk featuring fellow Sarabande Foundation artists Karimah Hassan, Semin Hong and Hamed Maiye alongside Gibbens herself, I am instantly captured by the hypersaturated, burlesque and slightly eerie visual style permeating all of her work, independently of the medium of choice.

As her artist bio reads, Gibbens “looks at the world as an alien visitor attempting to conform to the behaviour expected from citizens, but not quite managing”. Thanks to her craft, she gets to make sense of the world around her engaging with a variety of topics, including gender performativity, sexual politics, consumerist culture and their overlaps. Talking about her signature aesthetic, which purposefully juxtaposes cute and freakish elements, the humoristic and the grotesque, she explains that it borrows from a number of inspirations — just like the ideas informing her work. “A lot of the time, it starts with an observation from daily life that I find confusing, strange or maybe unsettling,” Gibbens says. “Advertising is a strong reference for me; I find a lot of ads rather dystopian and uncanny, so I often try to explore this within the worlds of the work.”

In this sense, The New Me (2022), Gibbens’ body of work combining video, AR and NFTs along with her own exclusive line of merchandise, is quite exemplary of her fascination with commercials. A critical commentary on today’s consumerist culture, the series presents viewers with a parody of an absurd, dystopian and retro-futuristic vision of consumerism through a fictional corporation selling pointless products to bored customers. “For this project, I invented three imaginary products and designed advertisements in the guise of an imagined company,” Gibbens says. “It was a way to look at how goods are marketed and designed through the lens of self-improvement. This can become a trap, especially for women, who are encouraged to purchase items for self-optimisation or actualisation.” From the Relaxation and wellness exercise machine to the Super stylish and efficient cleaning outfit, Gibbens has got us all covered — satisfied or refunded.

In her exhibition Soft Girls (2021), the artist reinterprets Clemente Susini’s Anatomical Venus (1780-1782) to invite the audience to reflect on how female passive victims are portrayed through the history of art and pop culture… including your favourite Netflix series. A life-sized, dissectible wax model of a woman’s body, the artwork was commissioned by then-Grand Duke of Tuscany Leopold II as the main piece of Florence’s Museum for Physics and Natural History, the city’s first public science museum. Composed of seven removable layers and featuring her inner organs on display, the Venus in question is nothing like the ones you might have come across before: in fact, she was designed to both educate the public on human anatomy and replace human dissection. An extraordinarily manufactured piece, the Anatomical Venus was the product of a historical turning point that saw Florentine art fulfil both an instructive and aesthetic function, thus serving as a bridge between the city’s Enlightenment fervour and artistry.

“I was thinking about the archetype of the beautiful passive victim, the way this has influenced various forms of culture and therefore identity construction. I was also intrigued by the combination of sex, death, religion and science that the Venus represented,” Gibbens says of the vision behind her Anatomical Venus-inspired exhibition. At the foundation of Soft Girls lies the artist’s desire to unveil specific power dynamics that characterise the interplay between subjects whose genders are different. “In Soft Girls, I aimed to show how gender performativity and representations of desire are rooted in years and years of patriarchy,  through media and the way that we consume it,” explains the artist, referring to the visual symbols of attraction in cartoons — eyes popping out, jaws and tongues rolling out — as key to the development of the project. Just like a quote used by author Maggie Nelson, for Gibbens “art is a way to digest the world” and unpack its inexplicable peculiarities. Through her euphemistic, slightly sexual or fetish-inspired visual vocabulary, she shows how bodies are read in different circumstances, making a statement on how topics such as female objectification have affected her growing up.

“Much of my work is about navigating the process of looking and being looked at and the complex feeling these two positions can provoke,” Gibbens says. “When it’s successful, my work can skew the gaze by inserting humour and absurdity into sexualised imagery. Though I can never completely control how my body is perceived, as both subject and object of my own work, I feel confident in the ownership of my body and decisions.” Reflecting on the goal of her artistic practice as a whole, the artist explains that she wants to raise awareness of the way that bodies are consumed; of how the desire for products and desire for bodies are often intertwined. She also invites her audience to be wary of the ‘right way of doing things’ and keep nurturing playfulness in everyday life. “A really important message for me is that artwork can be silly and, simultaneously, deadly serious and that those two things can exist together,” Gibbens says.

Follow Rosie Gibbens on Instagram to learn more about her work and stay updated on her upcoming events.