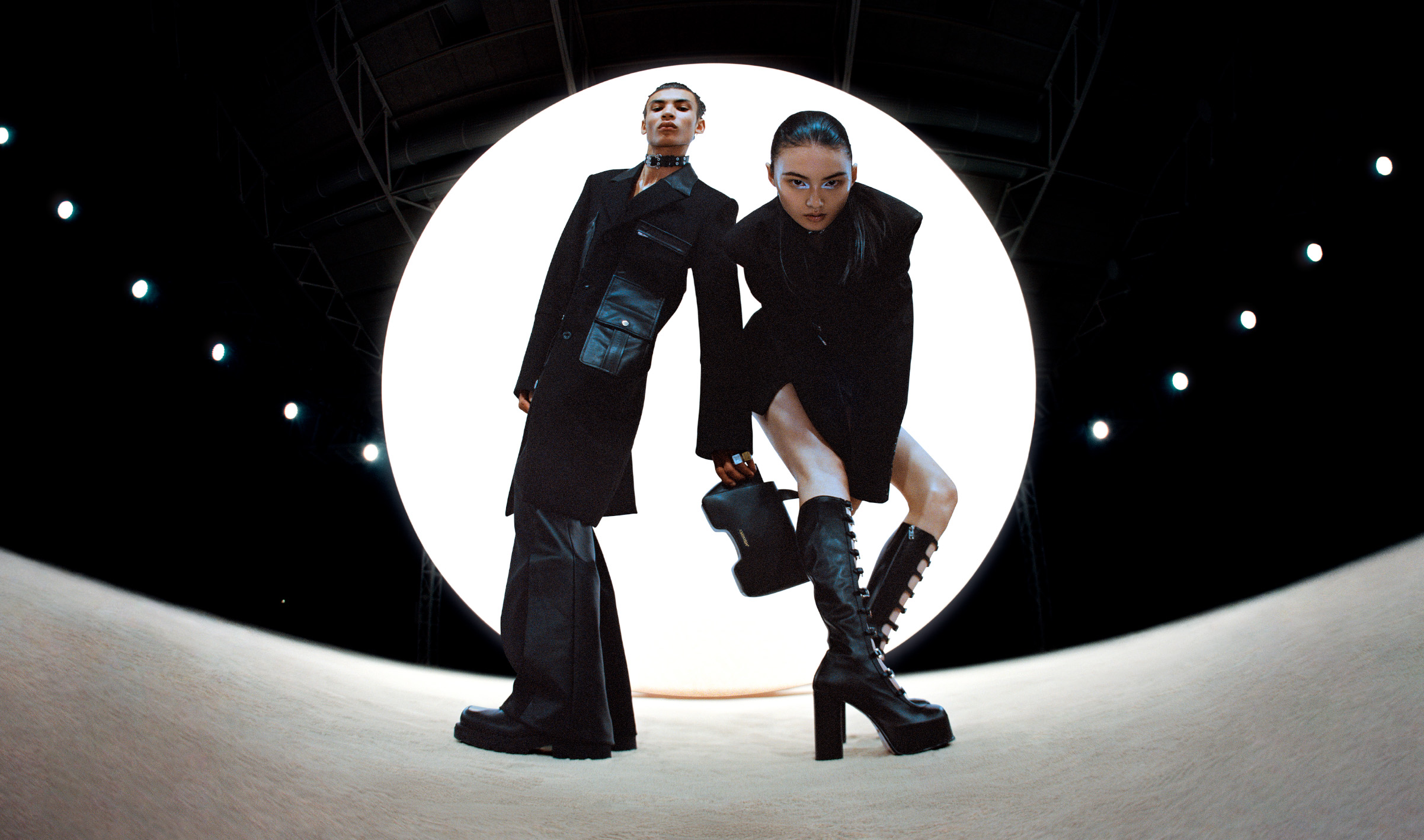 Yoon Ahn is a chameleonic talent who isn’t afraid to experiment with the possibilities of an ever-evolving world, reinventing herself as she takes up new unexpected challenges.

Born in Korea and raised in Seattle, Ahn first discovered fashion in her teenage years while working part-time at her local public library. It was by flipping through the pages of some of the most influential magazines of the time that she began to nurture her fascination with New York’s downtown fashion scene, becoming increasingly intrigued by its captivating aesthetic. Still, her mercurial creativity has always taken her far beyond the realm of fashion.

After graduating in graphic design from Boston University, Ahn cut her teeth on a couple of self-founded design platforms including the Ambush Design Company, through which she created album covers for music artists, and Antonio Murphy & Astro, her first-ever jewellery line. As a creative consultant, she leveraged her knowledge of the current zeitgeist to assist clients such as streetwear brand Billionaire Boys Club and e-commerce businesses like BEATS by Dre with the realisation of their projects.

Since 2008, Ahn is the creative director of AMBUSH®︎: an experimental brand born of the desire to redefine the notion of couture jewellery through “pop art-inspired designs capturing a distinct Tokyo aesthetic”. Launched in collaboration with her husband, the Japanese rapper Verbal, the Tokyo-based label first rose to fame in the late noughties when its AMBUSH ‘POW!’ pendant was styled by some of the greatest names in the upcoming rapper celebrity scene.

'Having reached international attention, in the following years, the brand experienced exponential growth, boasting high-profile collaborations eventually morphing into a unisex fashion line in 2015. From there, AMBUSH®︎’s success skyrocketed, leading the brand to be selected as one of the top 8 finalists of the LVMH Prize in 2017, and Ahn to be appointed Dior Men jewellery designer by Creative Director Kim Jones in 2018.'

As AMBUSH®︎ continues to expand its vision both on Earth and beyond — watch the brand’s metaverse space, SILVER FCTRY, for future reference — we caught up with Yoon Ahn to discuss the ins and outs of the Autumn/Winter 2022 campaign and learn what’s next for the trailblazing fashion label. ‍

Re-Edition Magazine: Since the launch of AMBUSH®︎ in 2008, you have continuously been under the spotlight. What lies at the core of your success?‍

Yoon Ahn: I wouldn’t say that I have succeeded as of yet. I’ve been telling everyone that I will define success on my deathbed. For now, I look at it as realising my own ideas and dreams.

‍RE: The AMBUSH®︎ Autumn/Winter 2022 campaign is lensed by visionary photographer Harley Weir and styled by Carlos Nazario. How would you describe it in three words?‍

RE: What can you tell us about the vision behind the campaign and the process that went into its creation?‍

YA: The set idea came from the metaverse we were launching at the time and symbolised our landing in that new venture, which felt almost like another planet. The campaign was all about portraying our ideas in a new, far-from-Earth context. I didn’t want to make it too literal; it isn’t set on a beach or a moon but in our own creative universe. I wanted to capture out-of-this-world beauty and Harley was the perfect photographer to bring the moment to life.‍

RE: It isn’t the first time Harley Weir lenses an AMBUSH®︎ campaign. What was it like to work with her on this project?‍

YA: I have been a huge fan of Harley’s work for years and have all of her books, including Beauty Papers (2022), which is right in front of me as we speak. I like her quirkiness and how she renders beauty through texture and colour in such a unique way. Her way of looking at things is very intriguing, and I was thrilled to work with her when we first joined forces on a campaign. Harley brought out a whole new world from our AW22 collection.

RE: How did Carlos Nazario’s styling contribute to shaping the end result of what became the AMBUSH®︎ AW22 campaign?‍

YA: I like working with Carlos because he is able to hit both notes of reality and fantasy. We always talk about being inspired by the culturally diverse people we see on the streets, and he is a student of culture. When collaborating on a project, we strive to achieve a balance between translating our own inspirations into something that feels relatable and staying true to the editorial perspective. I also like how he remixes the collection; I always tend to have a clear vision for how each new line will come together as final looks, but Carlos reinterprets the clothes in a new way. Our points of view complement each other.‍

RE: What references can be found in the AMBUSH®︎ AW22 collection and campaign? If not drawn from fashion and pop culture, where did the inspiration for the campaign stem from?‍

YA: I was thinking of David Bowie’s character in The Man Who Fell to Earth — an example of something that isn’t human yet tries to be human — and wanted to reference it through alien creatures that, having landed on Earth, looked sexy and slick, and owned it while marching into the city. The goal was to recreate this kind of in-between realms. I imagined what those extraterrestrial beings could mean for AMBUSH®︎ and how they would look like in the new metaverse world we were creating.

RE: Throughout the campaign, the jewellery-based past of AMBUSH®︎ echoes through the chainmail adorning dresses as well as bags, and in the “A” chain featured on boots and handbags. How do the accessories and jewels part of AMBUSH®︎ AW22 feed into its overarching narrative? ‍

YA: I wanted to connect our jewellery to our apparel by translating jewellery elements and motifs into different textures, materials, and details. For the collection, I was interested in making our long-time classic A-chain into a mesh. This metal mesh used 3D printing technology but also required artisanal handiwork to create the chain mail. Our jewellery has always been about bringing a contemporary twist to tradition — an idea that also permeates the rest of the collection.‍

RE: Paraphrasing AMBUSH®︎’s motto, “out of this world, on earth”, a fellow writer described the AW22 collection as being brought to life by “anime characters made real, and real people made digital”. Where does your fascination with a world that is “other”, extraterrestrial stem from? ‍

YA: Some of my references and inspiration come from movies, anime characters, and books, but a lot of my work draws on my curiosity to imagine what else is out there. Not having met any extraterrestrial creatures, I obviously can’t comment on what beings outside our perceived world look like. Still, it is exciting to imagine it. Our world is so small compared to the universe. A while ago, a friend sent me a photo of the milky way with an arrow pointing to Earth that reads, “YOU ARE HERE”. The milky way is so vast that you can’t even make out where the Earth actually is. It really puts into perspective how small and transient we are in this unimaginably massive galaxy.

RE: Whether understood in broader terms or more specifically through your work, what does the future look like to you today? What does it hold for AMBUSH?

YA: Personally, I am excited to be working on many interesting projects that move beyond the boundaries of my own field. I love learning new things and the process of learning drives me, so this is very exciting.

As for AMBUSH®︎, I think the future will be about defining who we are even more and strengthening our identity — where we come from and what we genuinely love. Hopefully, we can define this in various forms, not just fashion. I think of AMBUSH®︎ as a platform where to exercise our ideas and grow. AMBUSH®︎ is more than fashion and I can’t wait to share what else we are building.