What went down at THE NEW YORK STOCK EXCHANGE 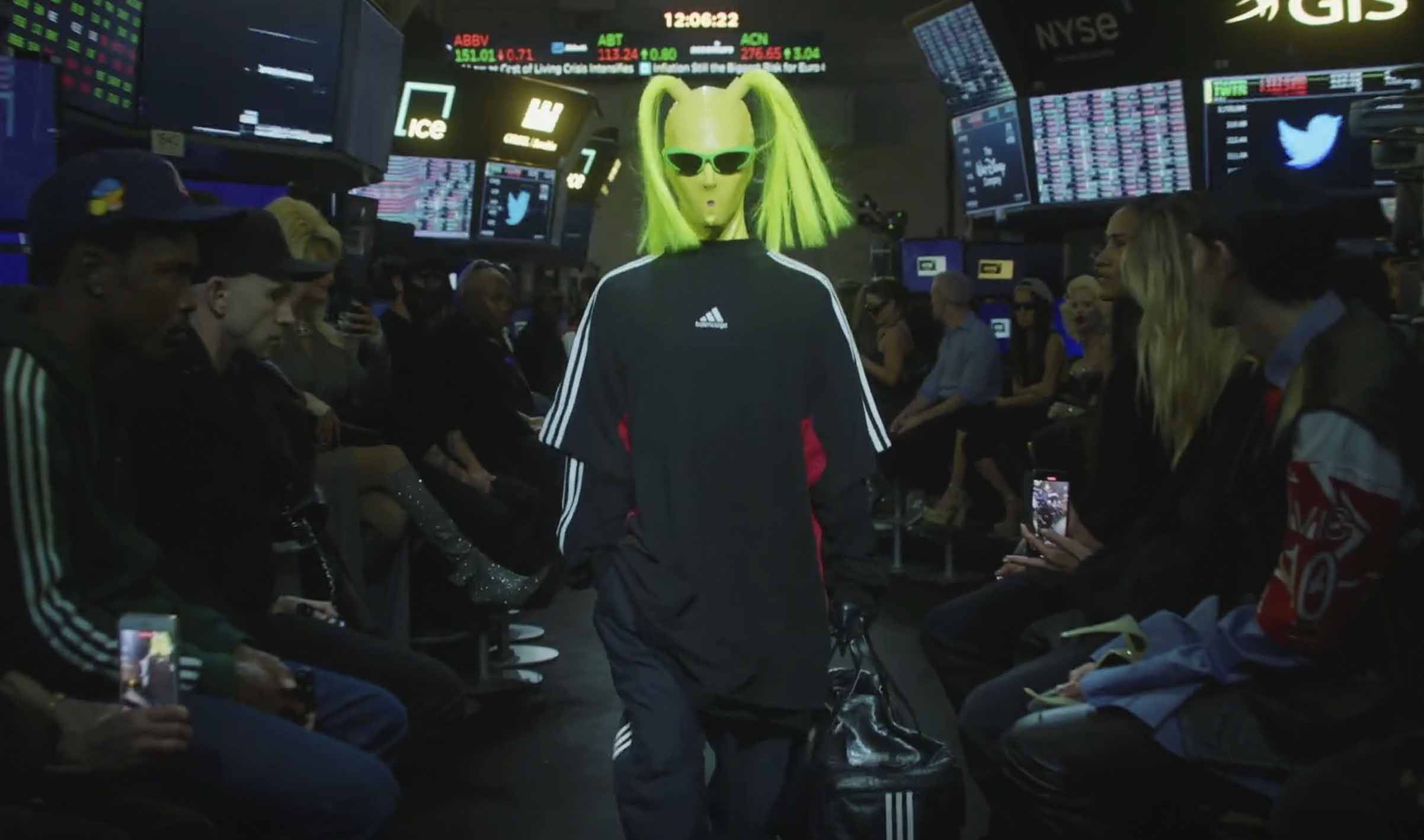 To mark his first-ever runway show in the US, Demna took over the New York Stock Exchange, the beating heart of Western capitalism, with a new subversive collection

Fetish fashion and BDSM met capitalism for the unveiling of Balenciaga Spring 2023. Set among the crackling screens of the New York Stock Exchange, the emblem of this very ideology, Demna’s first US-based runway show engaged the audience in yet another of his provocations. With guests including the likes of Chloë Sevigny, Ye, Frank Ocean, Pharrell Williams, Megan Thee Stallion, and Anna Wintour to name a handful, Balenciaga-branded $100 bills serving as this season’s invitation, and trippy soundscape provided by long-time Balenciaga collaborator BFRND, one thing is for certain: Demna’s debut on the fashion scene of the Big Apple hasn’t gone unnoticed.

In line with the principles at the core of capitalistic thinking — which reduces us all to mere numbers — the models walked through the corporate-headquarter-turned-fashion-venue in complete anonymity as head-to-toe latex bodysuits (a trademark of the Georgian fashion pioneer) obscured their identity. Unrecognisable and, at first glance, identical to one another, Balenciaga’s muses revealed the new Spring 2023 collection by bringing to life the just-launched Garde-Robe and eveningwear lines alongside the looks taken from the exclusive Balenciaga x Adidas collaboration.

If the Garde-Robe garments confirmed the label’s sartorial excellence through elevated cuts, sharp finishing, and luxe materials including wool, silk, gabardine, and artisanal denim, eveningwear proved the Maison’s ability to revisit formal attire (bodycon gowns, reconstructed tuxedos, and floor-length silk trenches with trains) with a Demna twist. Last but not least, the Balenciaga x Adidas drop allowed the mind behind the French house to experiment with different elements of sportswear that are core to the brand’s creative vision. From ready-to-wear and shoes to bags, jewelry, and accessories, all pieces from the collaboration featured a badge of sport — or trefoil logo — alongside the Balenciaga name printed in lowercase adidas typeface.

Drawing on the needs and aesthetics of corporate wear, in Balenciaga Spring 2023, Demna brought a fresh touch to traditional items such as trenches and suits by exaggerating their silhouettes in the most traditional of the house’s trends. Punk-like wide, pointy shoulders became the main component of this season’s outerwear whilst every other piece of the collection — from silky pussybow blouses and plisse dresses to the iconic two-piece sporty sets powered by Adidas — saw the NYC workaholic world collide with the ever-plotting, unpredictable universe of Demna.

A statement on the faults of the capitalistic system, the collection centred around the concepts of fetish, slavery, and consumerism culture to ultimately denounce the inequalities laying at the foundation of society. But what’s next for Demna now that he has conquered the temple of capitalism?